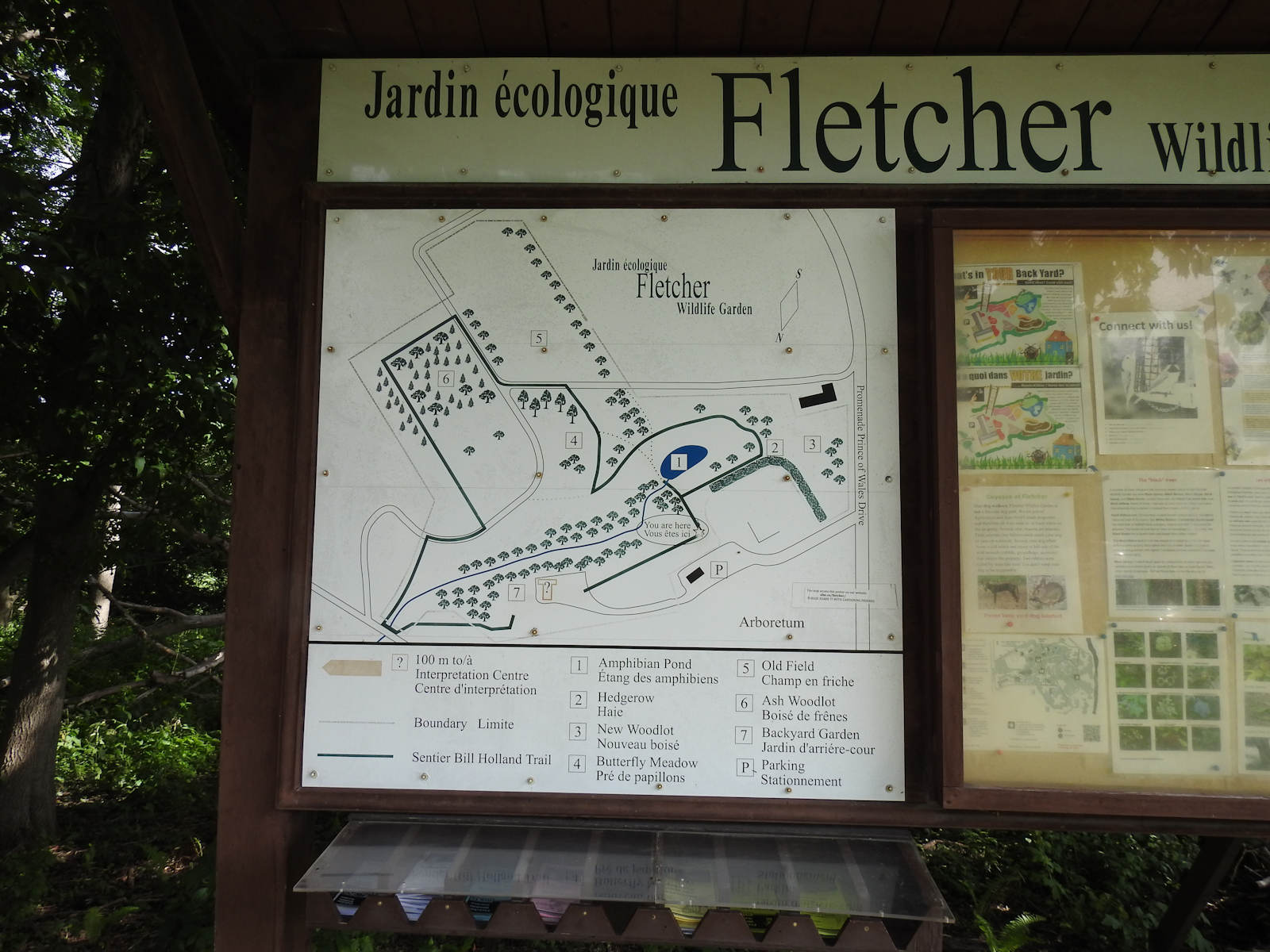 Billboard next to the parking lot with map of the site. 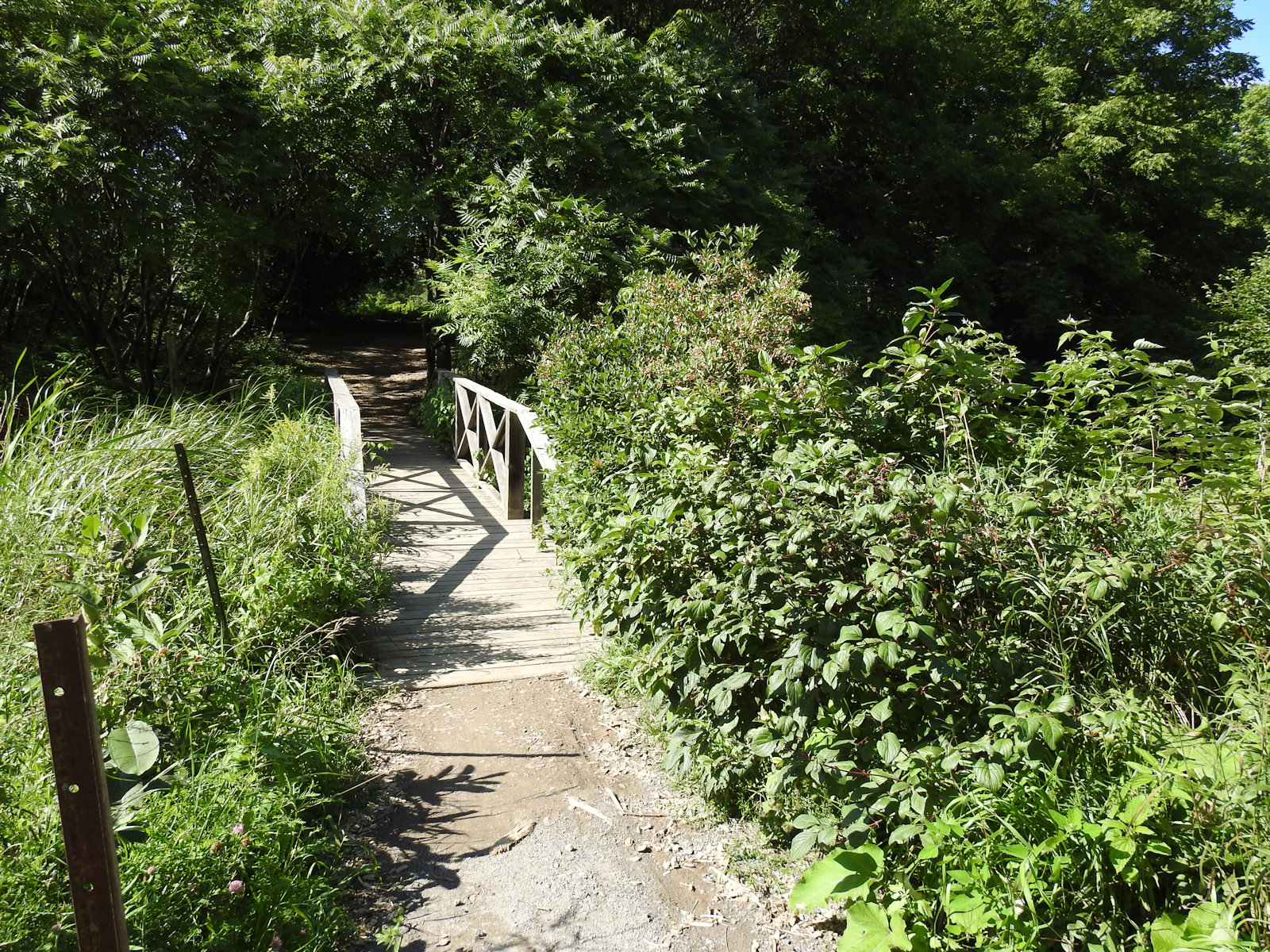 Walk down the slope to the bridge over the dam that created the pond. AAFC was kind enough to pay for materials. We paid for construction and architect was a volunteer. 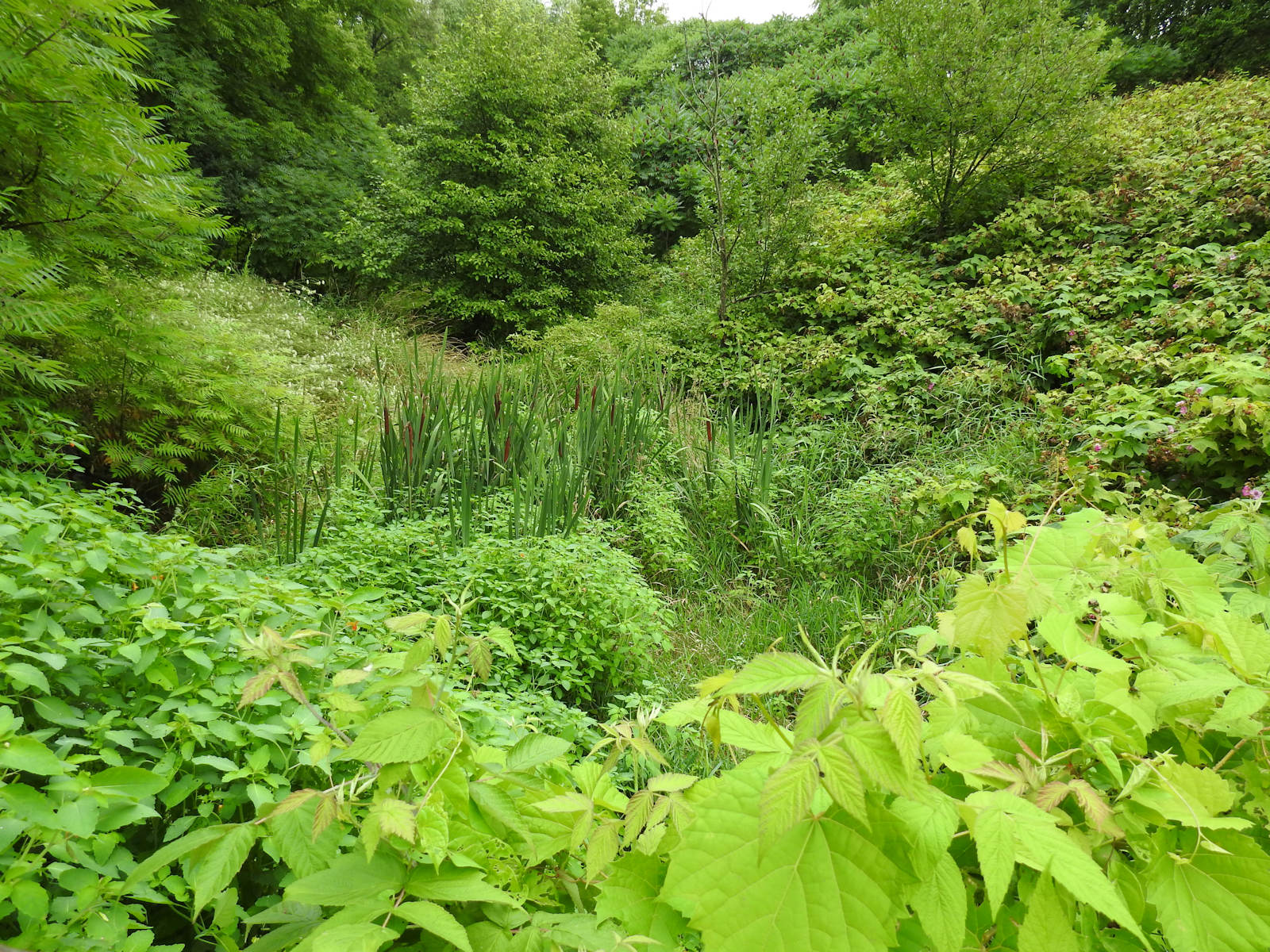 This is the view downstream from the bridge. The medium-sized trees in about the middle at the back were grown from seeds from my land. They’re Speckled Alders. Clumps of Jewelweed at the left and centre, raspberries and grape vines on the right, Purple-flowering Raspberries at the upper right corner. 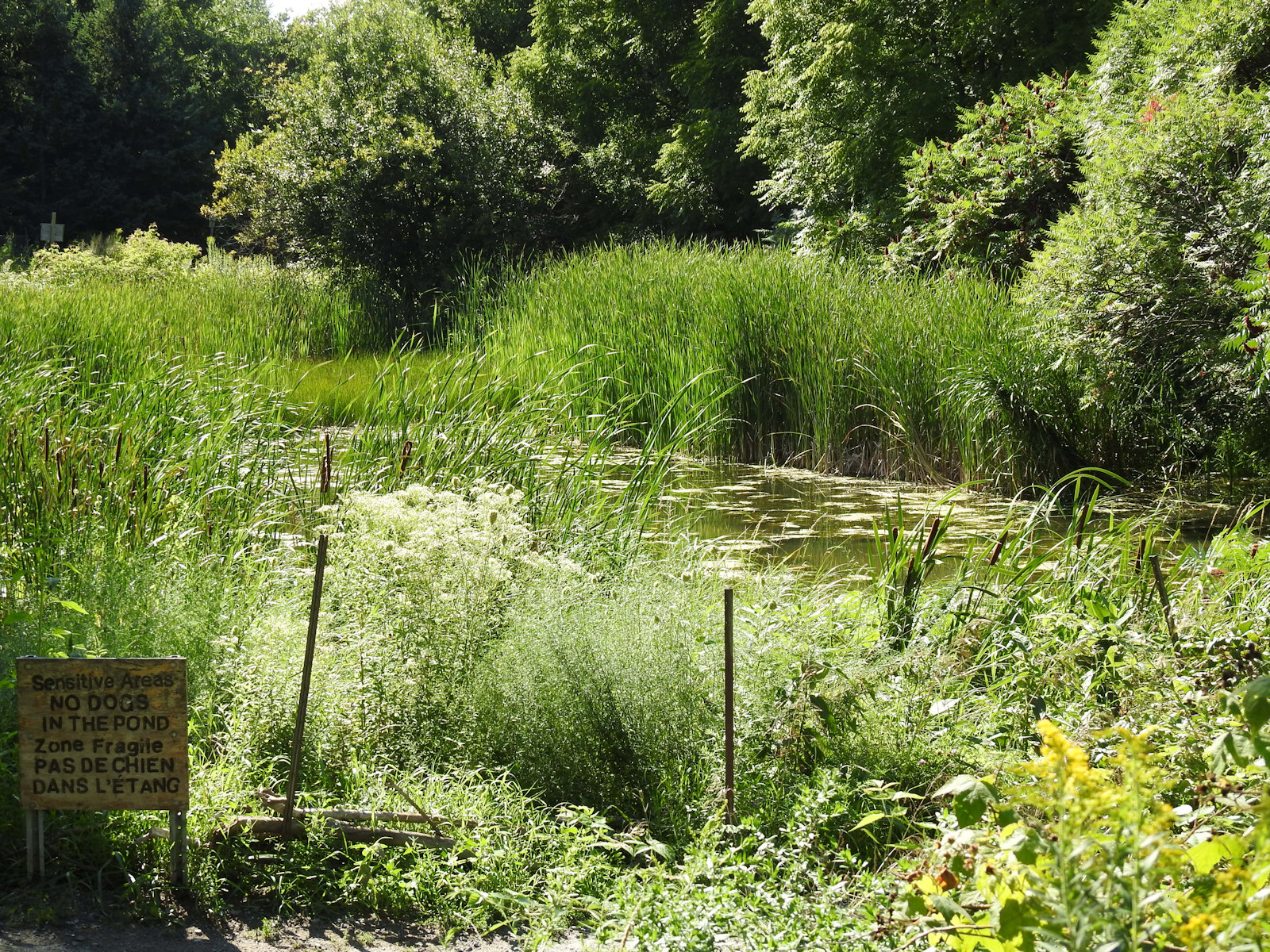 Pond above the bridge. Started out as a sedge meadow, but kept filling up with water. When the frogs arrived we gave up on the sedges and started calling it a pond. The willow at the far end is always covered in bees in the spring when it blooms. 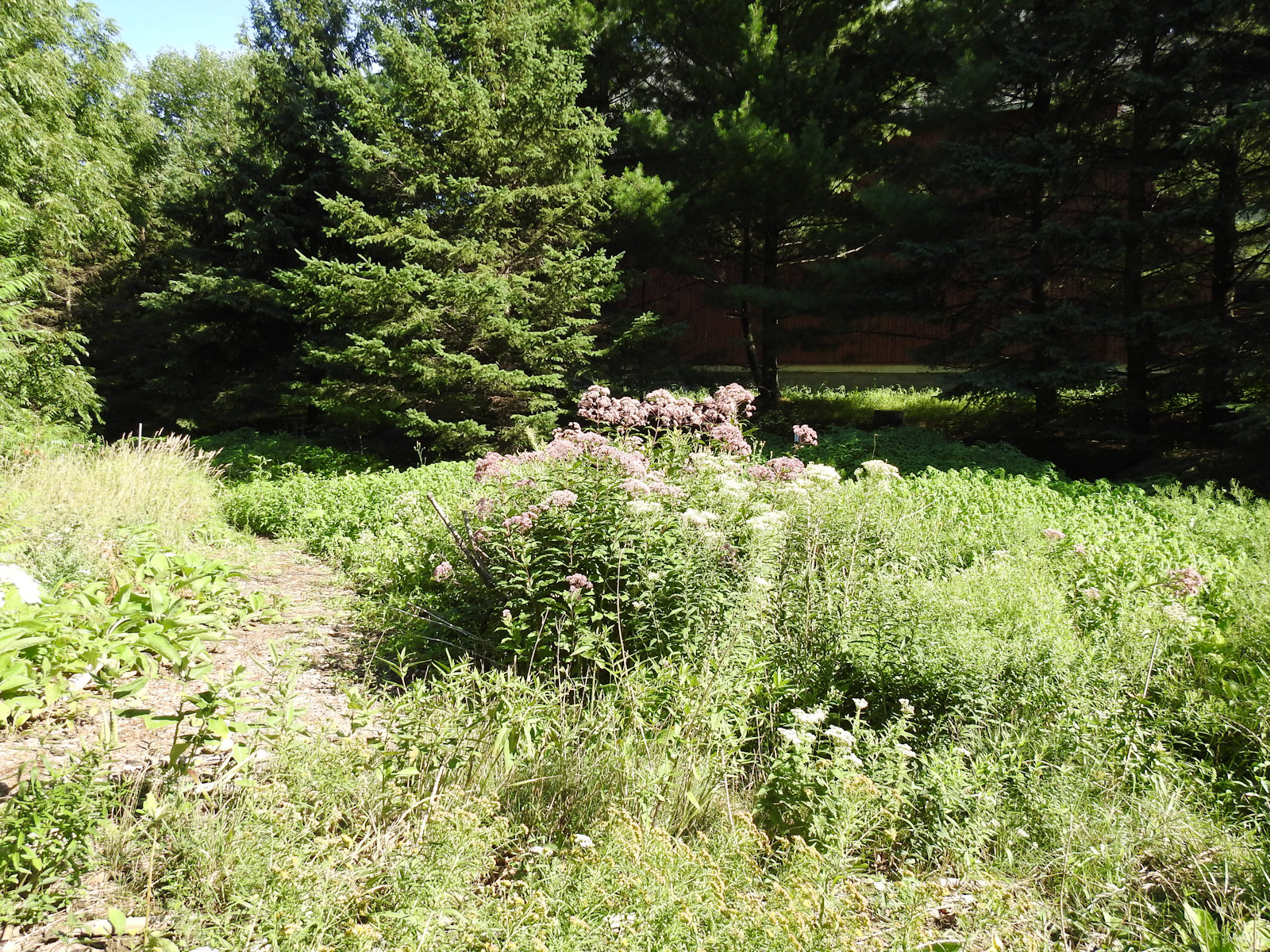 There’s a gully running from the west end of the pond to Prince of Wales. This is the upper end, which Prince of Wales behind me and you can just see the big red barn to the right in the background. This was a solid mass of DSV and Comfrey (both invasive). We’re slowly turning it into a wetland. Joe-Pye Weed in the middle (tall, pink flowers), Flat-topped Asters, goldenrods, milkweeds, meadowsweet, boneset, sedges. 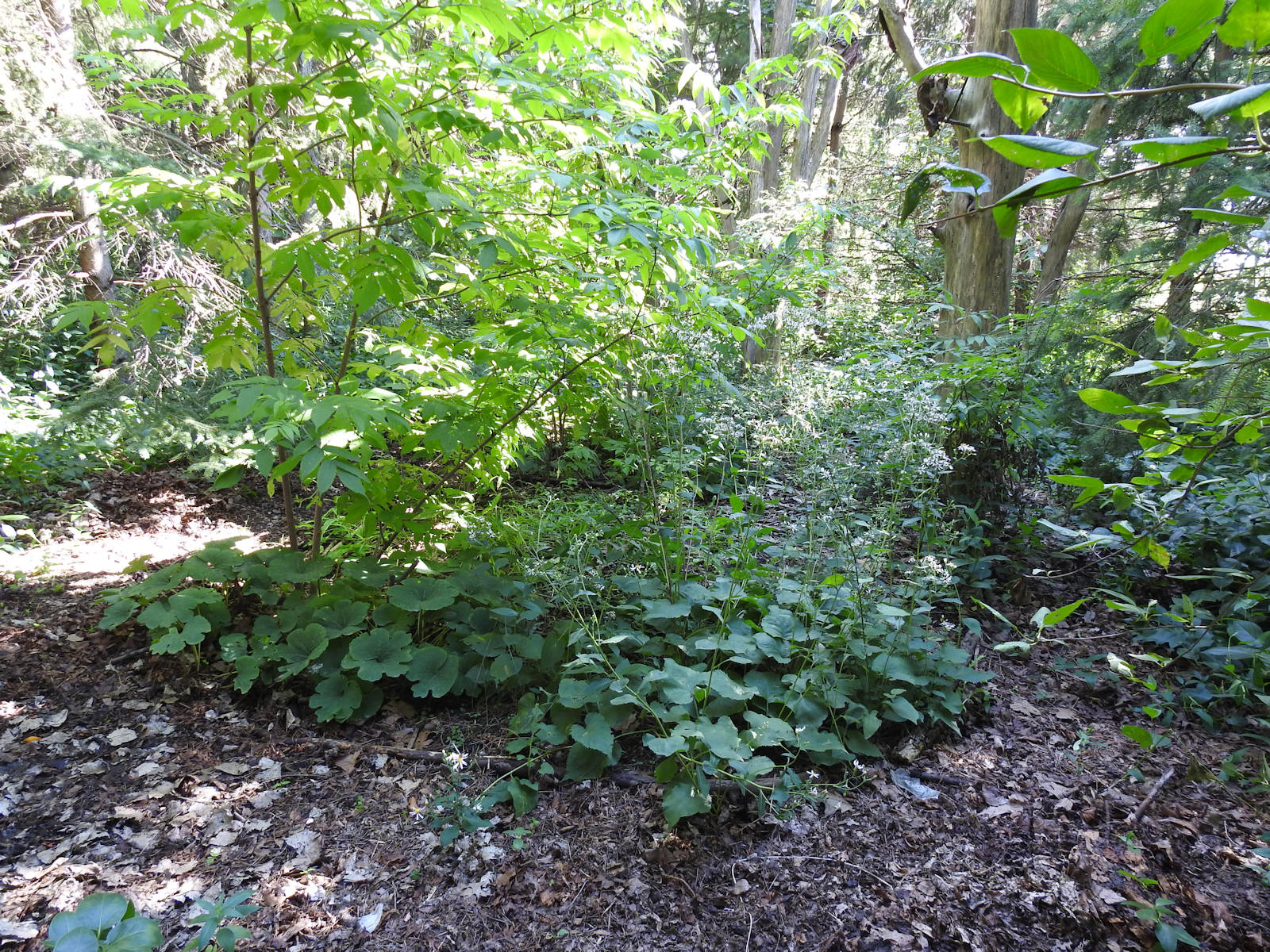 This is a clearing in the New Woodlot, between the entrance road and the gully. A couple of trees died, letting in light, so we planted a small oak tree, a bunch of Bloodroots, Large-leaved Asters (which are blooming in this photo, front right), sedges. The elderberry arrived on its own. We’re slowly expanding this as we remove DSV and plant native stuff. 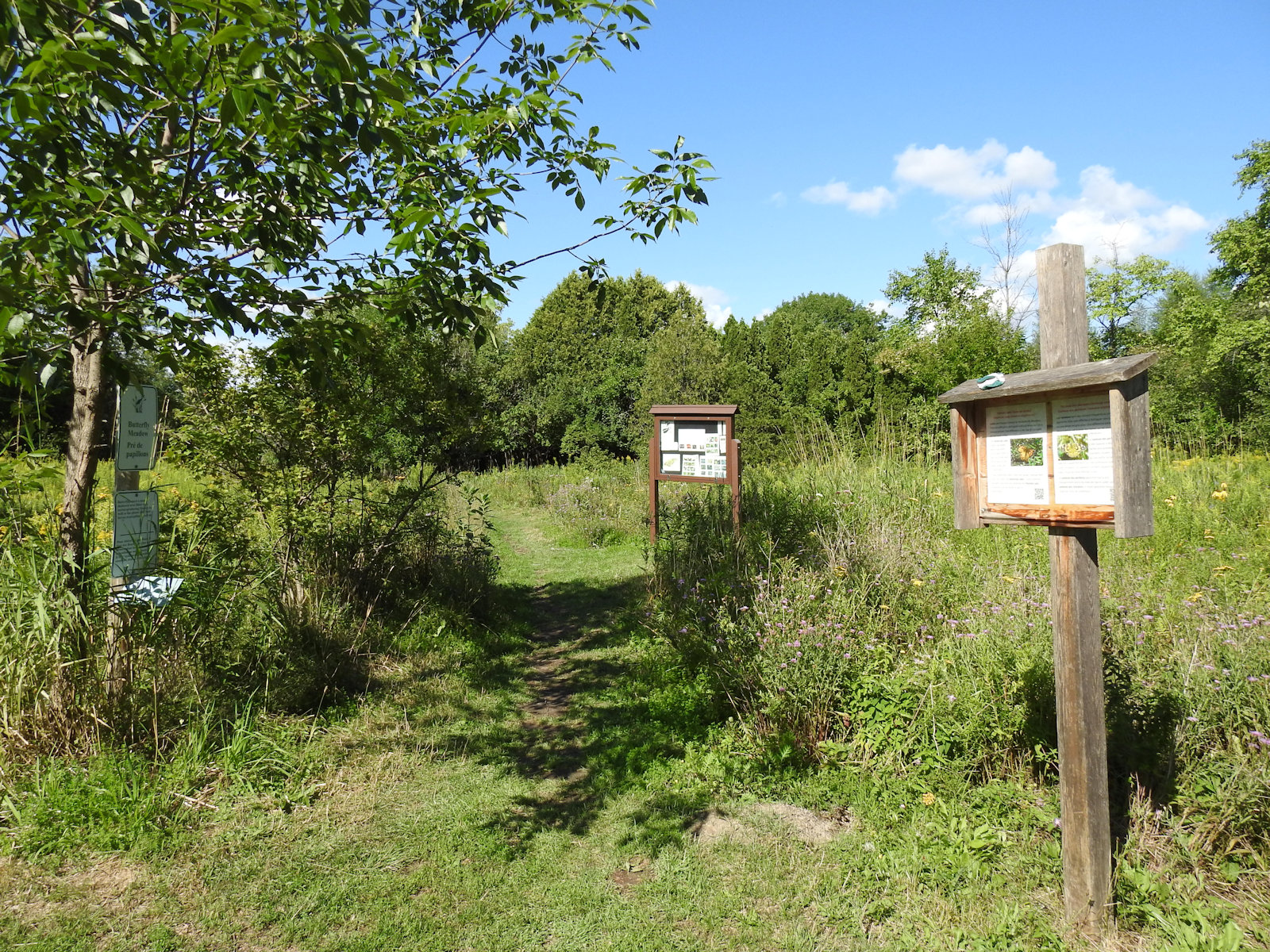 Butterfly Meadow. Photo taken from a bench at the crossroads of two trails. And there were actually butterflies in the meadow – a Great Spangled Fritillary and a couple of Mustard Whites. 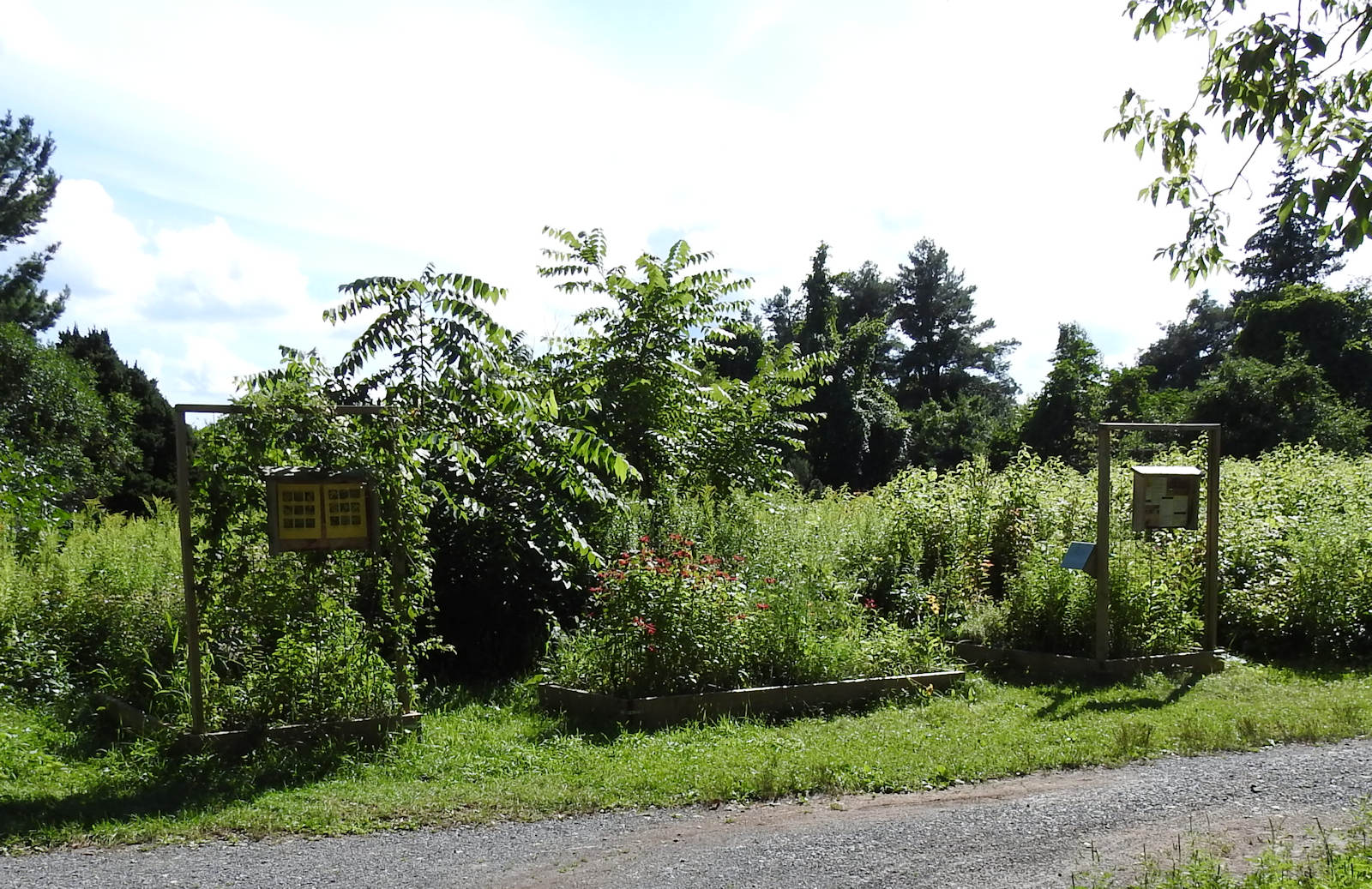 Pollinator gardens in a box – at the corner of the Old Field habitat. If you follow that road to the right, you’ll end up at the red barn. We did a project with Friends of the Earth to make gardens filled with pollinator favourites and small enough that anyone could do it. The Old Field keeps trying to turn into a forest, as these things do, so we need to cut down those walnut trees sometime soon. 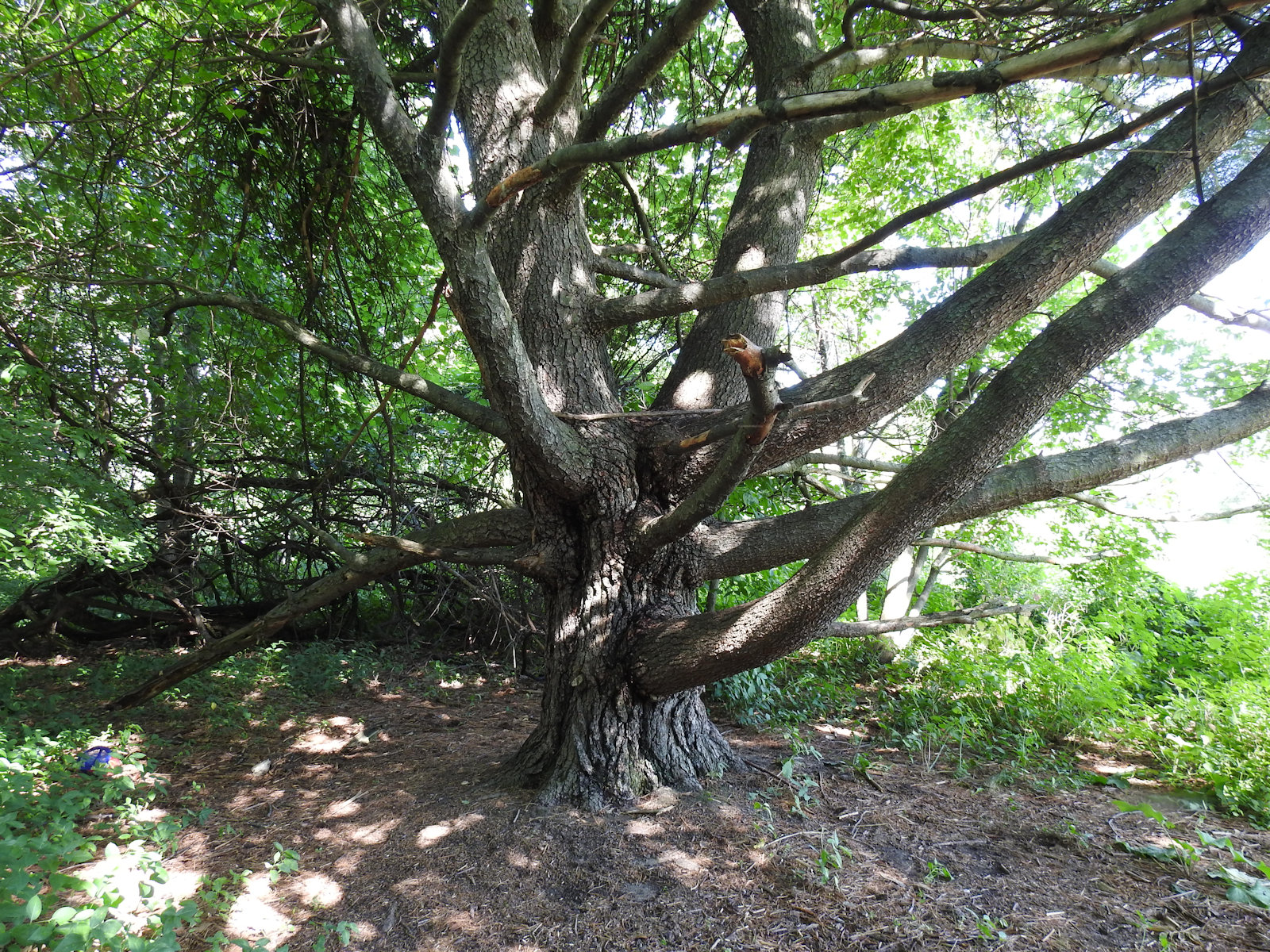 My favourite tree at the FWG – a White Pine on the south side of the Old Woodlot. 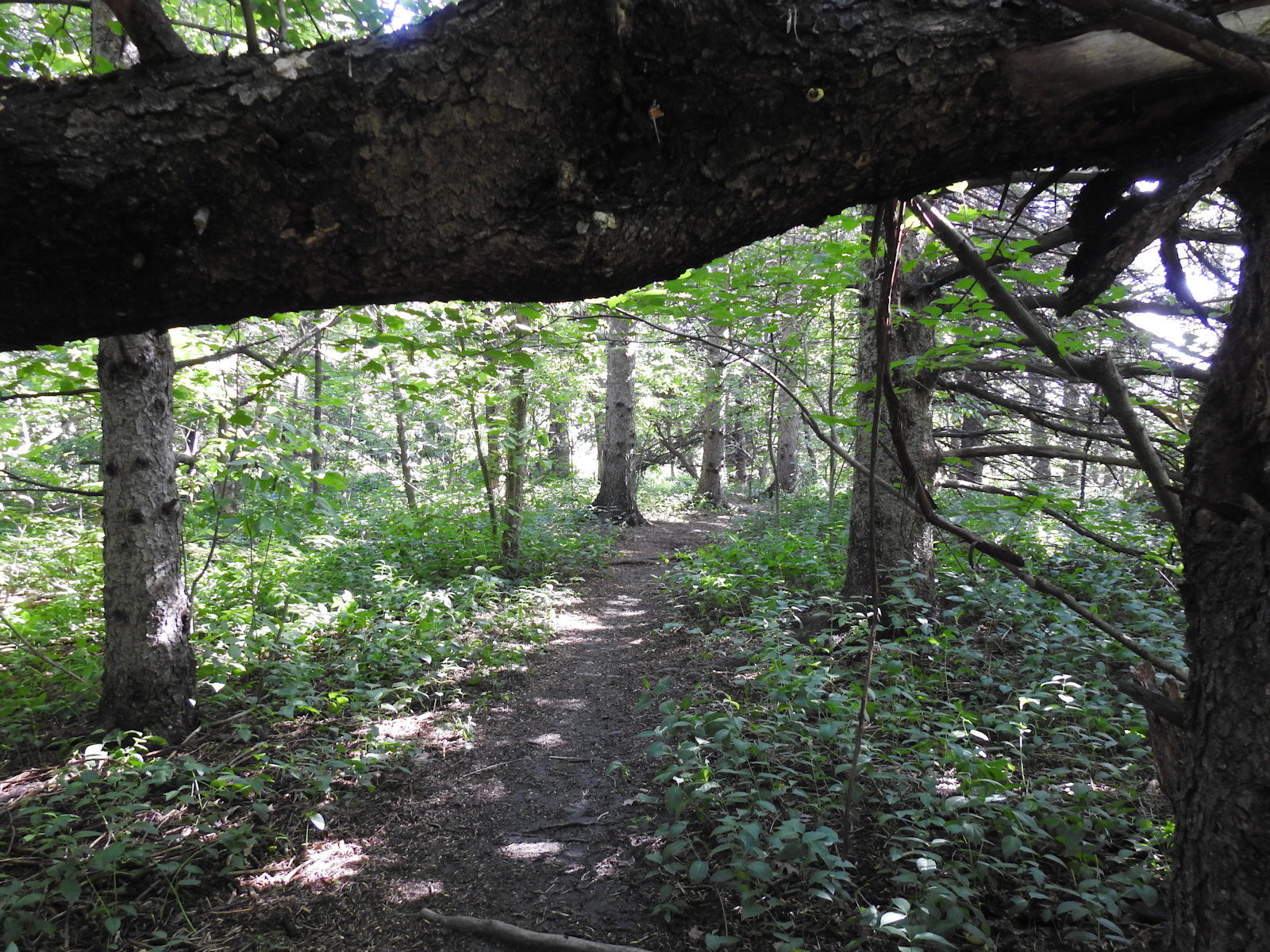 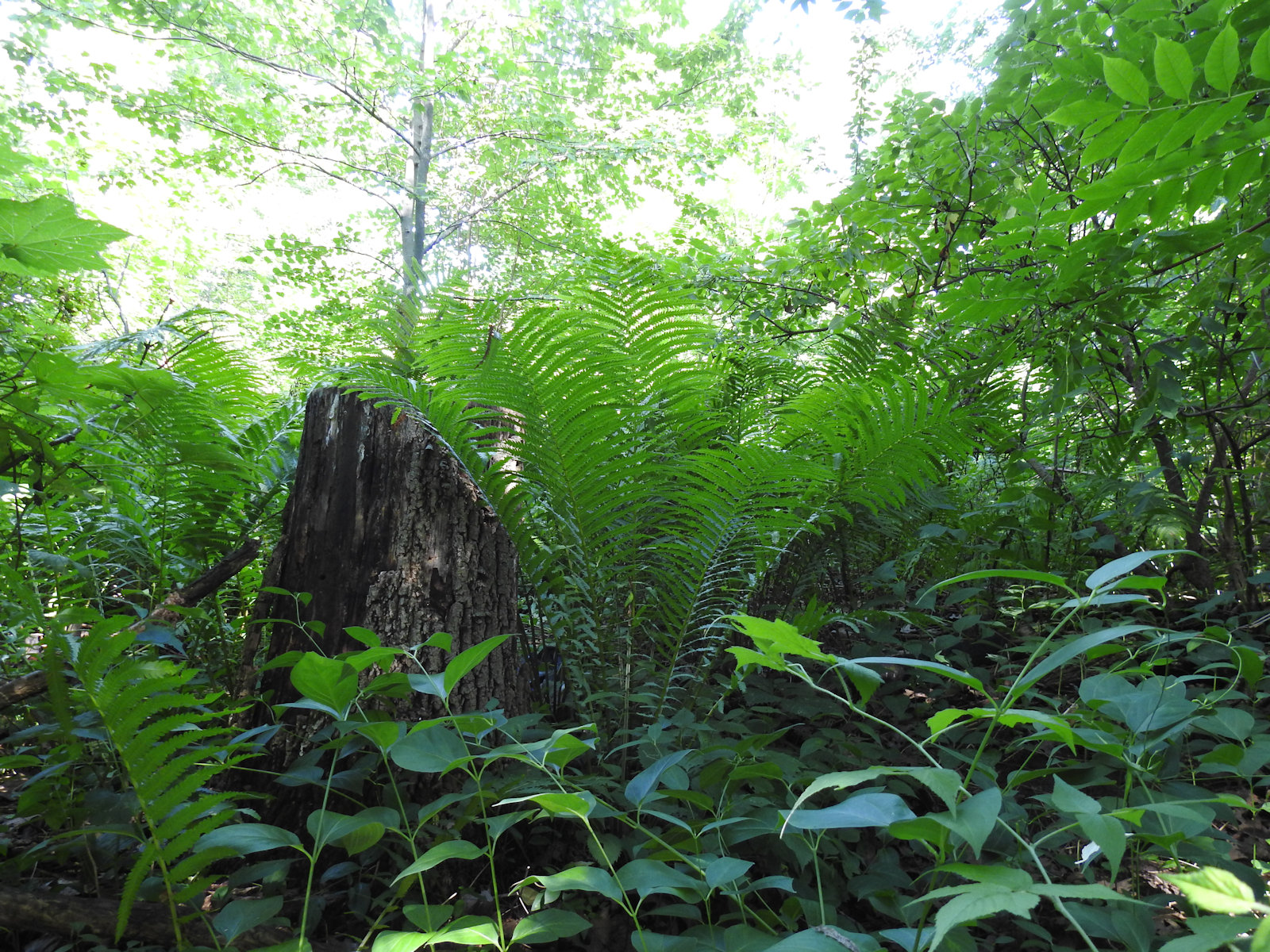 The stump is from one of the ash trees that was felled after it was attacked by Emerald Ash Borer in 2014. AAFC claimed the trees were a liability, but then they did the felling and did a good job – 50 trees, which made huge holes in the canopy. I made them leave the stumps and I also rescued some pieces of trunk and big branches to scatter around. 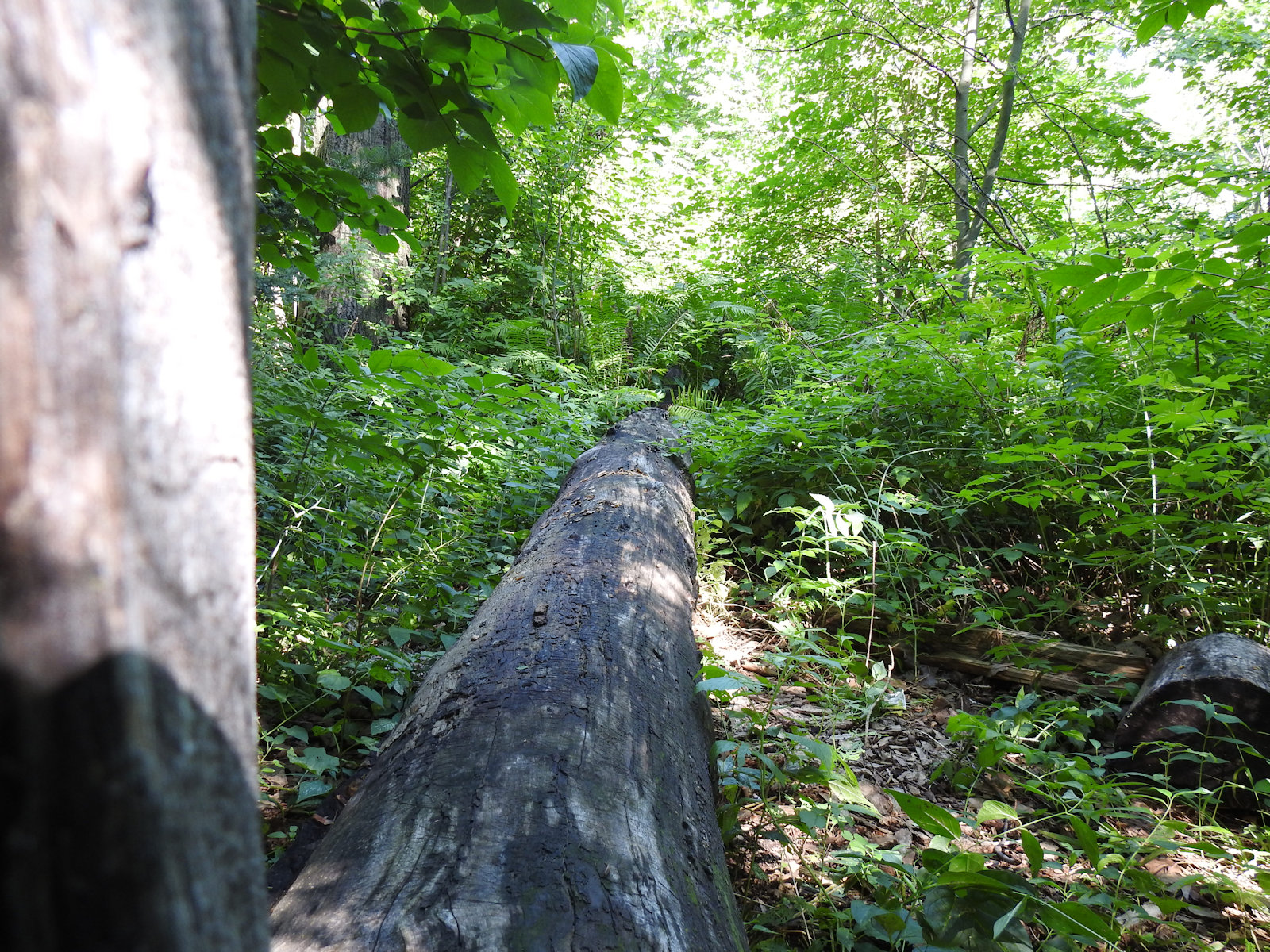 This is one of the Ash tree trunks that I got them to leave. I’m watching it decay. It’s taking a very long time. They don’t make baseball bats out of ash for no reason. 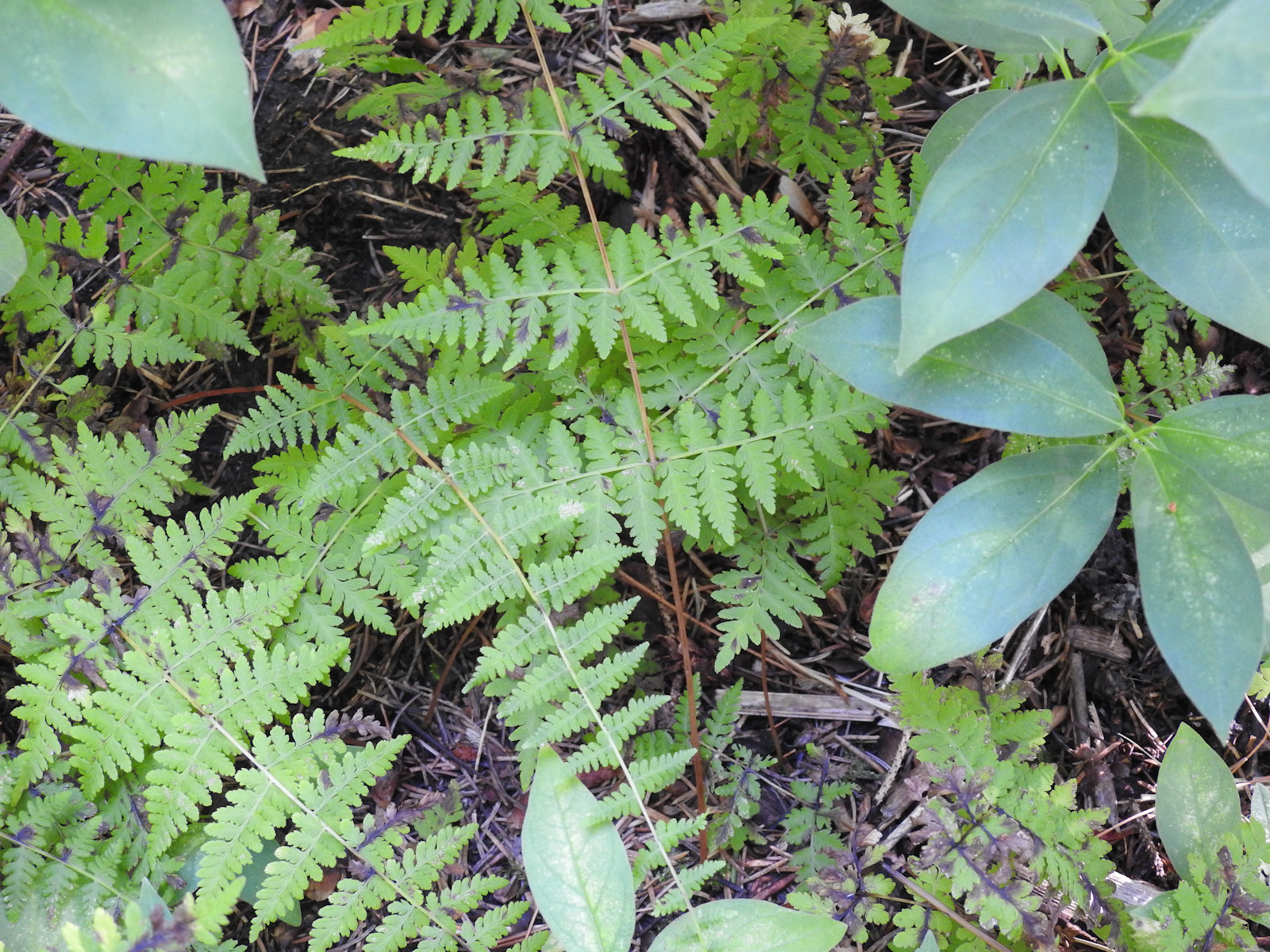 This is a real baby. A bunch of ferns that I grew from spores. Another very slow process. 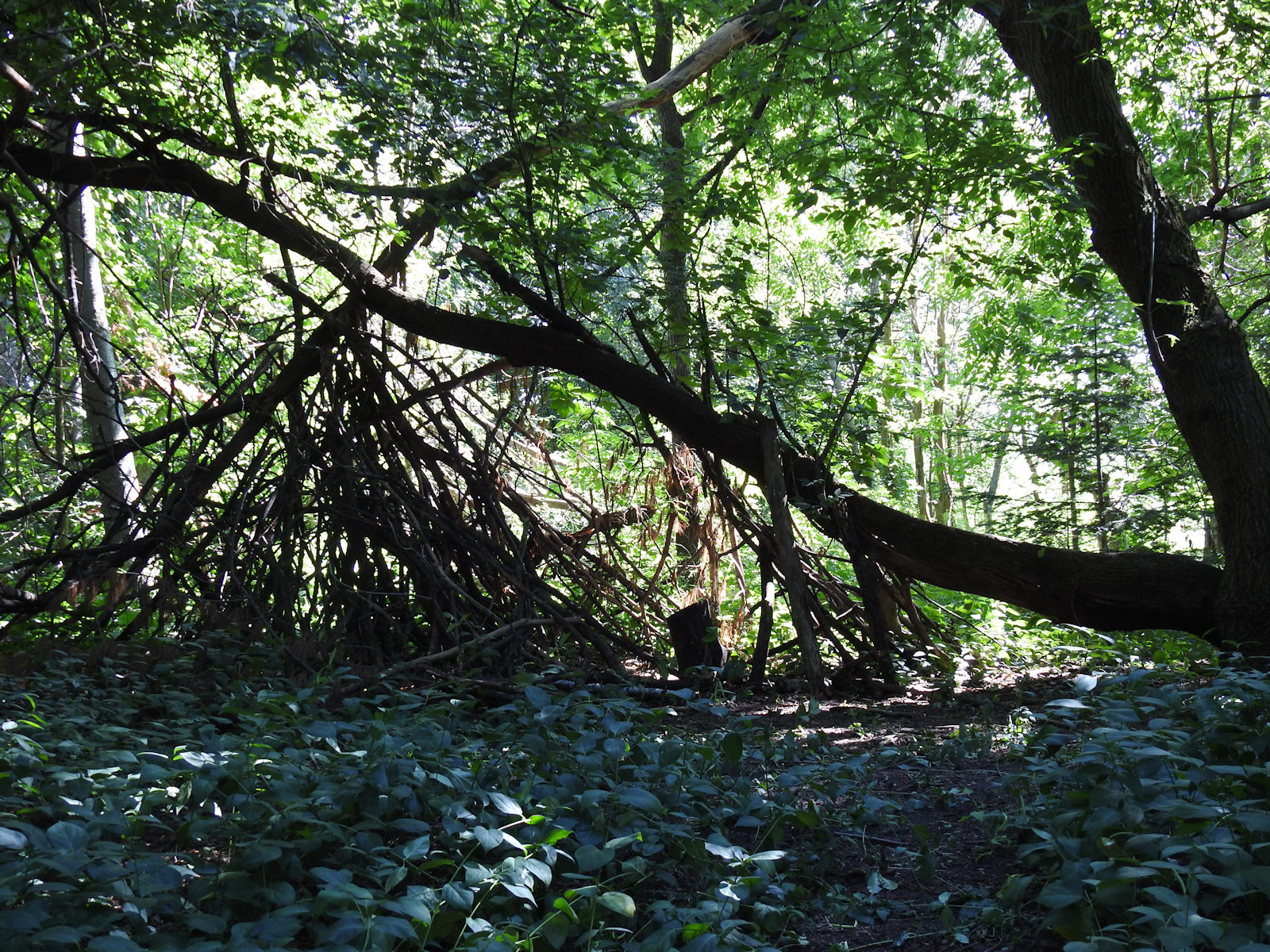 Signs that other people enjoy the woods too. Carleton students are forever rearranging things. As long as they don’t set fires or break glass, I don’t mind.