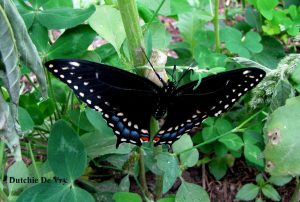 The Black Swallowtail (Papillo polyxenes) is a large, beloved butterfly in the Ottawa region.  Fastest of the Swallowtail family, adults often swoop close to the ground to avoid predators. Males put on elaborate courtship displays that can last up to 45 minutes and guard territories containing the best flowers to attract females. Female butterflies make the final choice.

There are usually two broods per year in our area. Spring emergence is usually early May, with adults flying around until early June; the second generation emerges from mid-July and flies until late August. Fall caterpillars overwinter in chrysalises. 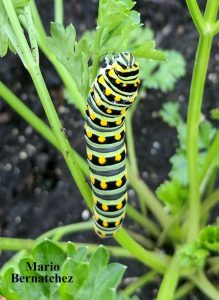 Eggs hatch in 3 to 5 days. When caterpillars are small they resemble bird droppings in white and black, eating on top of the leaves for disguise. In the later of the 5 instar stages, they become the familiar black, green, and yellow striped caterpillars (see photo at left), which blend better under the lacy foliage. Startled caterpillars inflate a pair of bright orange tentacles from behind their head that exude a horrible odour to discourage would-be predators. 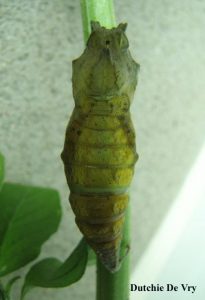 Once they are about 5 cm in length, anywhere from 10 to 30 days after hatching, caterpillars wander, looking for a good spot to spin a chrysalis, often close to the ground on the base of a plant, shrub or young tree. The brownish chrysalis has a distinctive girdle of silk threads that support the pupa. The pupal stage can be as short as 9-11 days until emergence of a new butterfly whose wings dry in a matter of hours.

Adults have been recorded feeding on the following North American native flowers. Please include these in your butterfly garden.

Renée De Vry has a wealth of experience growing native plants and is a keen observer of the creatures that use them. She managed the Meditation Garden at the Unitarian Church on Cleary for 20 years.