Milkweed muddle: why NOT to plant tropical milkweed 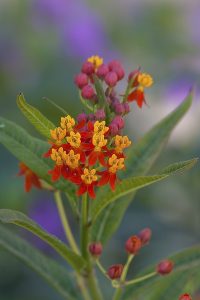 As though they are not already struggling enough (see Threats), Monarch butterflies now face an additional challenge. This new one, ironically, is linked to milkweed planting efforts!

It turns out that the various species of milkweed – the plant where Monarch butterflies lay their eggs, the only plant the larvae can eat for their development, and the plant many people throughout North America are cultivating to save the Monarch butterfly – are not created equal. Some of the differences lie in the toxic chemicals (cardenolides) produced in the plant’s leaf tissue.

Monarchs have evolved to tolerate those chemicals to a certain degree. When the caterpillars eat milkweed leaves, they ingest the chemicals and become unappetizing to predators. It is a great survival strategy. But when levels of cardenolides rise, the strategy can backfire.

That is the problem with one milkweed species in particular: tropical milkweed or blood flower (Asclepias curassavica), which is native to South America and apparently popular in garden stores throughout the southern United States. This attractive and easy-to-grow species offers numerous attributes, including higher levels of cardenolides which help butterflies gain more weight and increase their chances of survival.

But experiments conducted by Louisiana State University researchers reveal that warmer conditions can boost cardenolides in Asclepias curassavica to levels where caterpillars feeding on the leaves risk unintentionally poisoning themselves. Milkweeds native to North America apparently do not react the same way to warming.

It is feared that the widespread cultivation of Asclepias curassavica in the southern United States (so extensive that some are considering it an invasive species), along with warmer conditions caused by climate change, may combine to deal Monarch butterflies another serious blow. As if that were not enough, tropical milkweed has also been associated with a crippling parasite.

We can breathe a sigh of relief in the Eastern Ontario-Outaouais region, because Asclepias curassavica does not grow easily here. But the overall situation is worthy of attention because it illustrates the potential problems associated with non-native (potentially invasive) plants, the benefits of cultivating regionally native species, and the need to be precise about the identity of plants we are purchasing.

For regional sources of native plants, check out our website.

Renate Sander-Regier has a passion for wild bees. She seeks to encourage them and other native pollinators in different habitat planting projects – at her rural home, the Fletcher Wildlife Garden, the University of Ottawa campus, and more.

One response to “Milkweed muddle: why NOT to plant tropical milkweed”