Revised and reprinted with permission from Wasps at the FWG

According to David and Norma Barr (1981), wasps are one of our “strongest allies in the ongoing biological control of leaf-feeding insect pests in the garden. One colony of native wasps in the backyard can produce hundreds of workers which, over the summer, take a tremendous toll of flies, caterpillars, grasshoppers and other backyard pests.” And remember, only the females are equipped to give a painful jab, so a backyard nest of yellowjackets does not mean mass stings.

According to Heather Holm (2014), wasps visit flowers for nectar. They don’t collect pollen, but might incidentally transfer some from one flower to the next, so they are accidental pollinators.

When most of us think of wasps, we are really thinking about members of the Vespidae family, the colonial wasps. They are the most common and the ones we most often notice, mainly because we encounter them defending their nest aggressively when we accidentally disturb it.

According to the Barrs, “There are only three main kinds of vespid or colonial wasps in North America … yellowjackets, paper wasps, and the Bald-faced Hornet. Unfortunately, these common names have become hopelessly mixed up through local usage.” 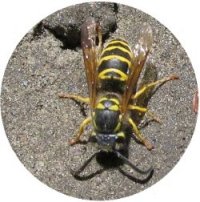 Yellowjacket can be “any of the 20 or so North American species of small, bright yellow-and-black wasps that build almost perfectly spherical paper nests either in cavities underground or (less frequently) hanging from a tree branch attached only by a narrow stalk at the top.”

Yellowjackets are most commonly sighted during late summer and fall when food sources decline and the worker wasps — now numbering in the thousands and no longer busy in their colonies — spread out over backyards, picnic sites, and anywhere else they sense available food. At this time of year, they also seem more aggressive and unpredictable. Even so, “their pest status is limited only to a few weeks in late summer and fall, and at that time the chance of multiple stings is not great.” 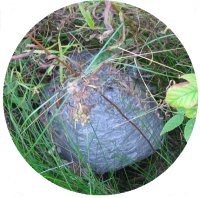 At the FWG, we don’t usually notice yellowjackets at all until early September. Several volunteers have inadvertently disturbed an underground nest while weeding and have been stung badly. The stings are quite painful and itch for days to weeks afterward.

The nest at the left was discovered in our Old Field, right on the ground. It’s quite large – almost 30 cm in diameter. 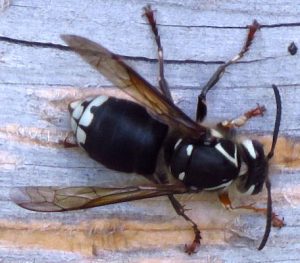 The Bald-faced Hornet (Dolichovespula maculata) is “a larger, chunkier version of the yellowjacket but with lighter coloured areas of the body cream to almost bone white; builds large shapeless paper nests in trees or bushes, almost always with several branches and numerous twigs woven through the body of the nest for support” (Barr and Barr 1981). 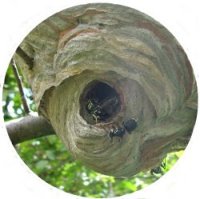 At the FWG, we have found hornet nests in both shade and sun, in a plum tree about 2 metres above ground, in a pine tree about 3 metres up, and very close to the ground in a young Amur Maple tree in the field.

We have watched hornets come and go and, as long as we don’t inadvertently disturb the nest, they pay no attention to us. However, they can be aggressive if threatened. One large nest in an apple tree disappeared over night, likely predated by a raccoon looking for a meal of wasp larvae, so the wasps are justified in defending their home.

Paper wasps (Polistes spp.) are “an elongate, narrow, slow-flying and bumbling darker wasp with long spindly legs and dominant body colours of black, brown and amber; nests above ground in unprotected paper combs suspended in a sheltered location on the underside of a rock or a tree cavity and especially under the eaves of buildings; never surrounds the comb with a paper envelope” (Barr and Barr 1981).

At the FWG, we’ve seen two species of paper wasp: Polistes fuscatus (below left) built a number of their typical umbrella-shaped nests in our garden shed one year. Polistes dominula (below right) took up residence in the sign marking the beginning of the Bill Holland Trail. In September, we found one small P. dominula nest in the shed. 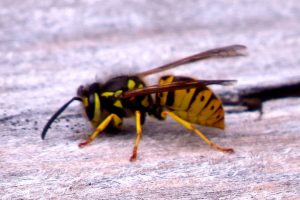 Adding to the confusion is a yellowjacket lookalike called the German Yellowjacket (Vespula germanica), which became established in Canada only in the 1960s (Barr and Barr 1981). It is more inclined to nest in cities and suburbs and will use the inside walls of buildings, attics, and even the “joist space between a floor and the ceiling below.” It remains “active in the fall much longer than most North American yellowjackets” and is considered somewhat more aggressive. If you have to have a wasp nest removed, you should call in a professional.

According to Holm (2014), “Solitary wasps build nests in a variety of locations including burrows in the ground, cavities in plant stems and wood, and cavities formed with mud.” Females do the building on their own and do not defend their nest as colonial species do. 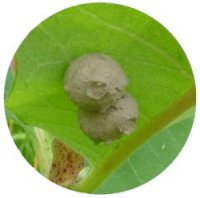 Adult potter wasps feed on flower nectar and collect small caterpillars to feed their young. The caterpillars are paralyzed by the wasp’s sting and stuffed into compartments that the wasp builds out of clay. The female wasp then lays an egg on the stored caterpillars. The potter wasp larva consumes 1-12 caterpillars as it grows, making this species important in the natural control of caterpillars.

The potter wasps we have noticed at the FWG construct tiny round clay jars with a narrow neck. We’ve found these on the underside of milkweed leaves (above left), on Queen Anne’s Lace flowers, and on the inside wall of our garden shed (right). 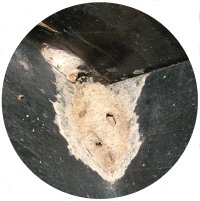 Mud daubers construct small nests of mud in or around homes, sheds, and barns. At the FWG, we often find what look like blobs of mud under the eaves of our Resource Centre. The one at the left is about 7 cm long and contains 4 or 5 cells. These wasps are long and slender with a narrow, thread-like waist. Some are a solid blue-black, but others have yellow markings (photo below right). 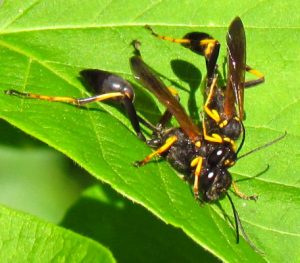 A female mud dauber collects mud, rolling a small amount into a ball and carrying it to the nest site. There she forms it into tubes – usually several side by side. When the mud is dry, she captures insects and spiders to stuff into the tubes, depositing a single egg on top before sealing each tube with more mud. The eggs hatch, the larvae consume the prey, and eventually become adults.

Many other species of wasps exist in our area; this is just a quick overview of some common ones. For example, just on Swamp Milkweed, you might see Yellowjackets, Great Golden Diggers (Sphex ichneumoneus), Great Black Wasps (Sphex pensylvanicus), and Square-headed Wasps (Tachytes spp.).

Although they play only a minor role in pollination, wasps are beneficial in other ways. So, try not to panic unnecessarily when you see these insects in your yard – they are likely helping you by keeping real garden pests under control.

One response to “Wasps – the gardener’s friend”