Agapostemons in the Corner Pollinator Garden

This week, while I was supposed to be weeding the garden for upcoming tours, I came across a peculiar ground nest beside the driveway. I have never seen anything like it before, and I immediately worried that I had ground-nesting wasps next to a busy walkway. The nest is conical with two “chimneys.” After some research, I concluded the structure didn’t look like a wasp nest. 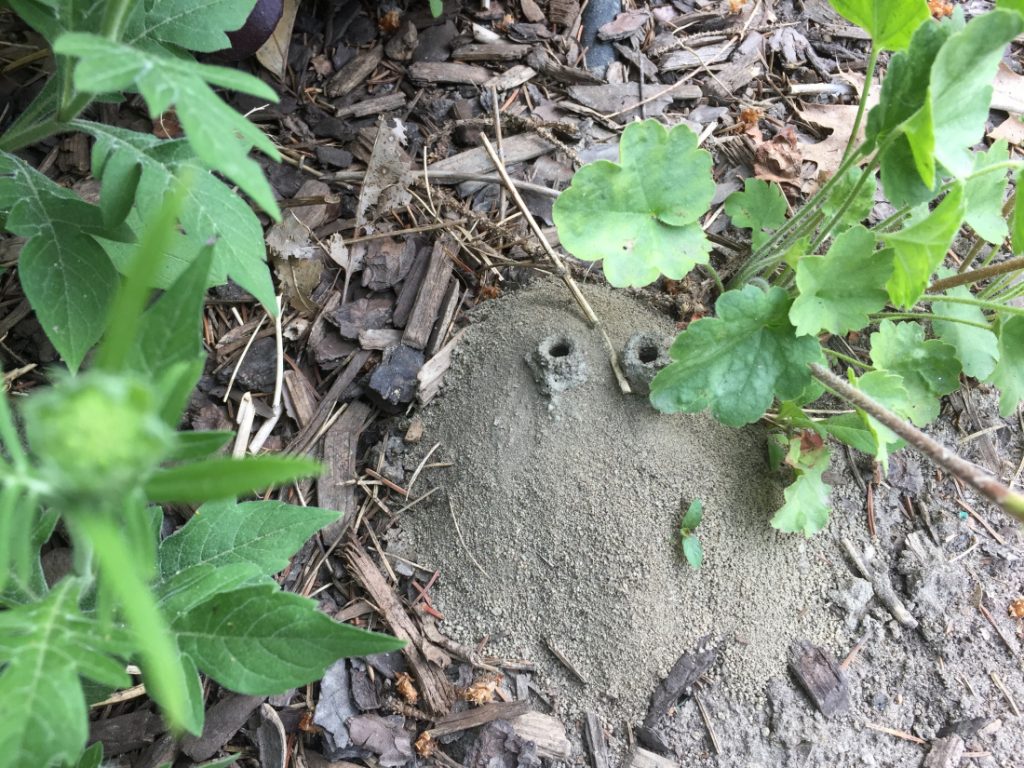 I camped out on the uncomfortable asphalt to observe. The weeds could wait because I had more important investigative work to do. Whatever was in there would appear, but pop down out of sight whenever I got close. Strangely, and a bit disturbingly, smart. 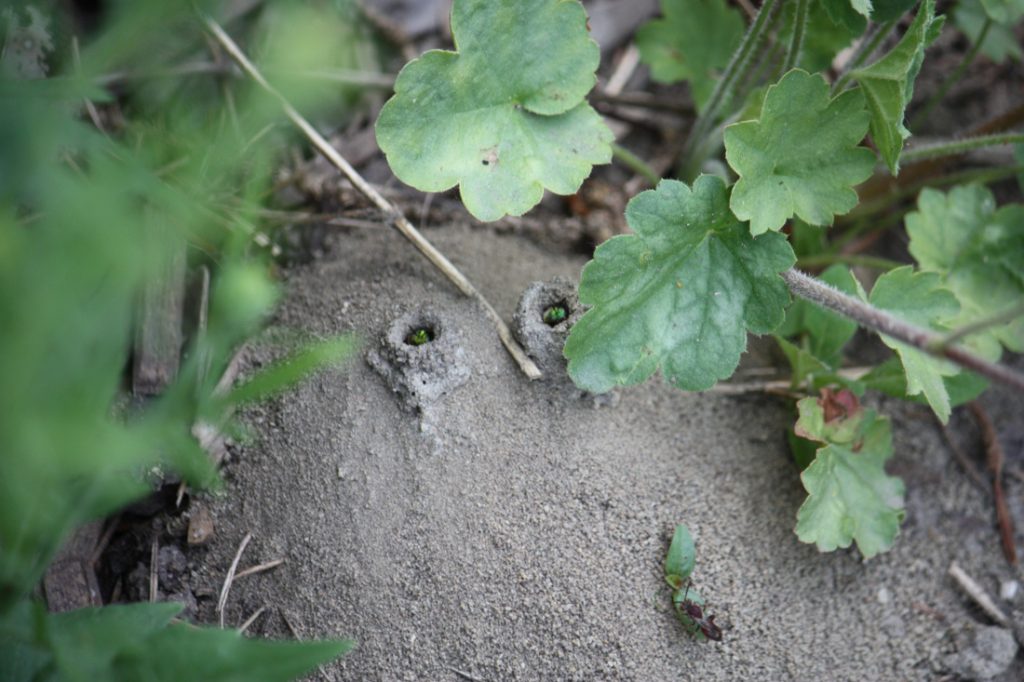 After I was still, they began flying out — five of them in total. Here’s a brief YouTube video of them exiting the nest. I could see pollen on their legs, which confirmed that they’re bees (vegetarian) and not wasps (which eat other insects, and nectar). Also, they’re a very pretty green on top, with striped abdomens. Aha! They are bicoloured Agapostemon, also known as green sweat bees. I have seen them go into ground nests before, but only singly, and never into such a strange-looking structure.

If you have a sharp eye, you can see one of the reasons the green sweat bees are on guard. Sitting on a leaf in the lower-right, you’ll see a kleptoparasitic bee lurking, waiting for an opportunity to invade their nest to lay its own eggs. 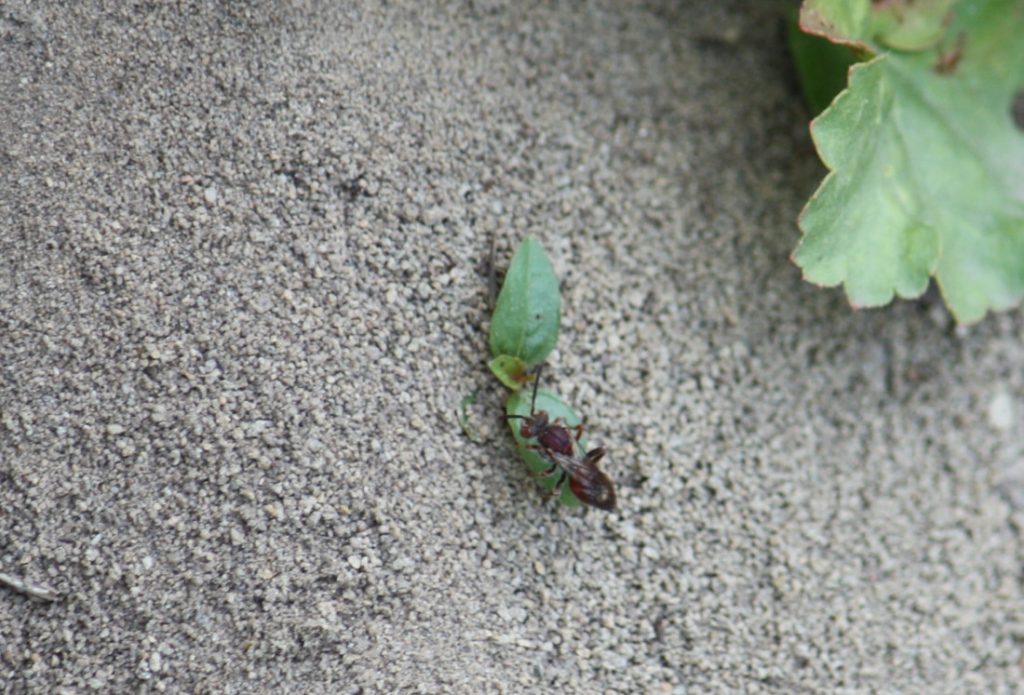 A close-up of the kleptoparasitic bee.

Well, the next question was: where were they finding all this pollen? They were making quick trips with significant pollen loads on their back legs. After looking all around the front and back gardens, and my neighbour’s garden, I found green sweat bees on prairie cinquefoil growing nearby. I grew this from seed last year and have never seen it bloom before. The flowers look a lot like strawberry flowers. 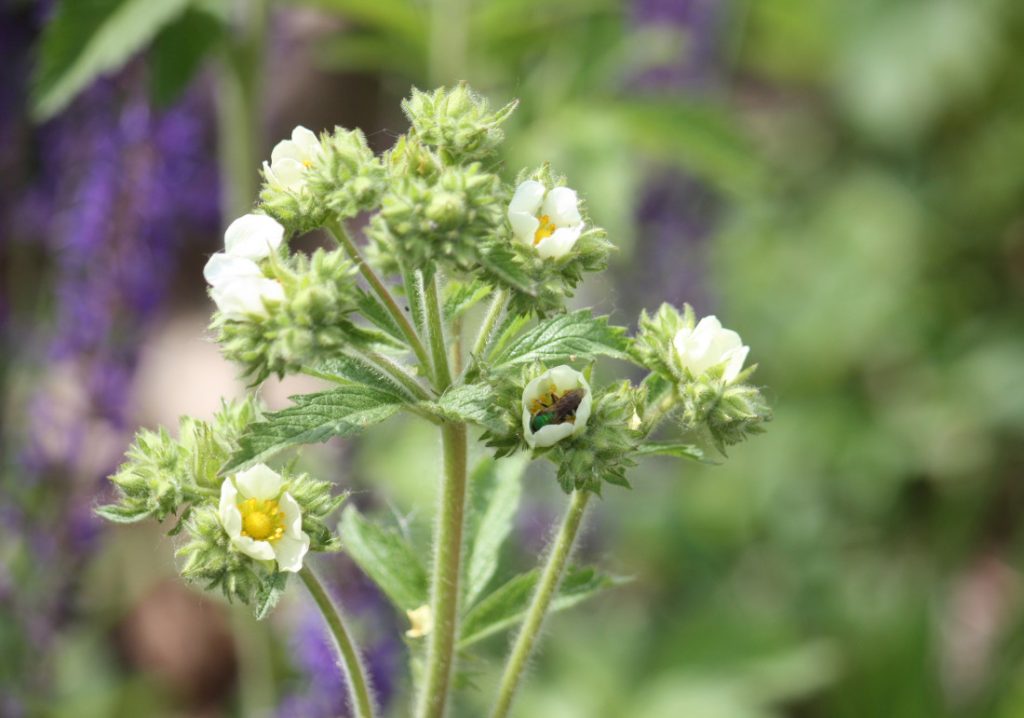 In Bumblebee Economics, Berndt Heinrich chose prairie cinquefoil as one of the plants for tracking pollen-collection visits of different bumblebee species (page 154). Other flowers included wild carrot (non-native), St. John’s wort, pond lily, and wild rose. I figured that these plants must be good pollen-producers, so I added them to my garden. The wild carrot (Queen Anne’s lace) was already in my yard and has been hard to eliminate because it self-seeds so prolifically.

From previous years, I know that green sweat bees also really like red pincushion flower (Knautia macedonica). This plant is short-lived but self-seeds moderately, so there are lots of flowers around. I’ve grown red pincushion flower for years because it blooms for months, and I like the dark red colour of the flower buttons. 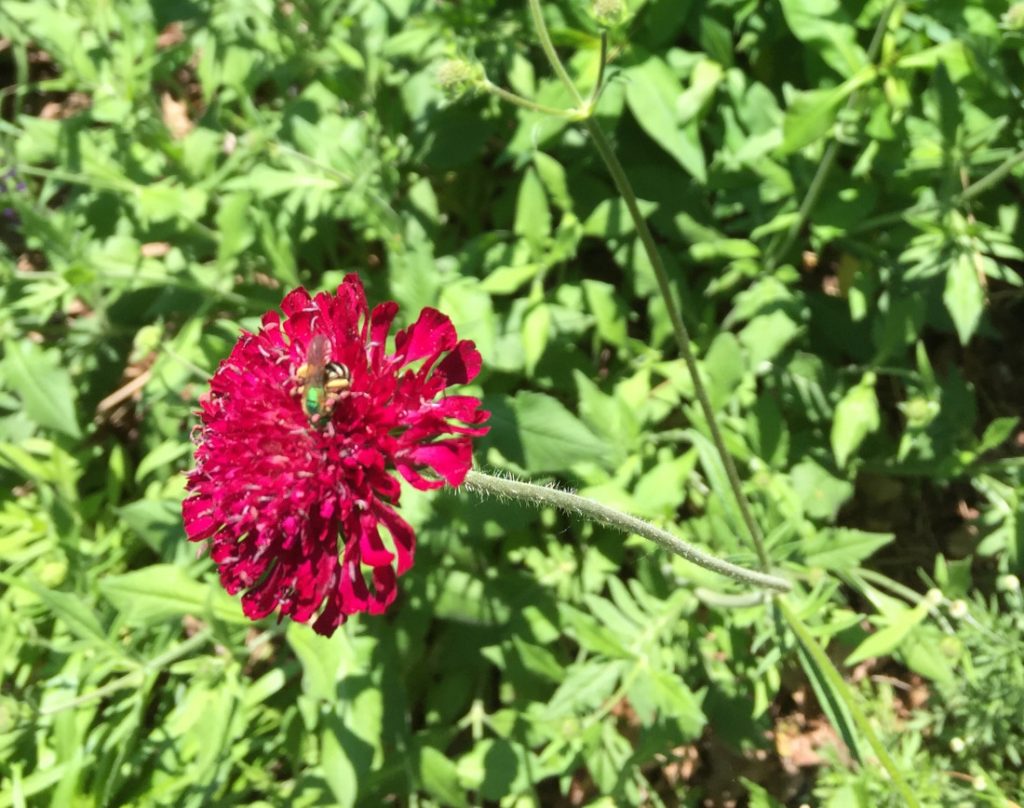 Like I always say, you never know what you’ll see in the garden. Back to weeding.

Berit Erickson is a member of Wild Pollinator Partners and a strong believer in the motto “Think globally, act locally.” She has transformed her Corner Pollinator Garden into a magical oasis for pollinators and other wildlife and wants the rest of us to do the same in our yards.