by Sandy Garland, photographs by Sandy and Alysha Riquier

This summer, we’re determined to learn to identify the main groups of bees and other pollinators. We’re also curious to know what what plants and conditions pollinators prefer. For the third summer, students at Ottawa U are conducting ongoing surveys on campus. At the end of June, we had an identification and survey day at the Fletcher Wildlife Garden. Today (18 July 2019), Alysha and I decided to have a look at the gardens along Bank Street. 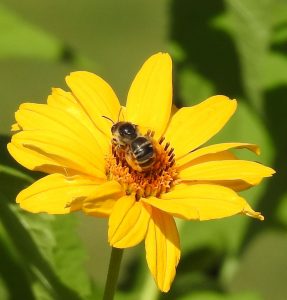 Small bee visiting False Sunflower (Heliopsis helianthoides) in a garden next to the Sunnyside branch of the Ottawa Publlic Library. Later identified on iNaturalist as a member of the subgenus, Eumelissodes (thanks to John Ascher).

We started at 5 pm – not the best time of day for pollinators (mid-day is usually better), but the sun was shining brightly and the temperature was still over 30 in the sun.

We met at the library, where a team of volunteers – the Green Dreamers – takes care of extensive beds of a mix of wildflowers, horticultural varieties, and a mass of sunflowers. The latter were not yet blooming, but we found a large bed of False Sunflowers (Heliopsis helianthoides), as well as smaller amounts of Beebalm (Monarda didyma), Wild Bergamot (Monarda fistulosa), and Nodding Onion (Allium cernuum). Several aster species (Arrow-leaved, New England, Heart-leaved) will be blooming later in the year, along with Joe-Pye Weed (Eupatorium maculatum).

Not much pollinator activity here, but worth checking earlier in the day and later in the season when the asters are blooming.

We walked down Bank Street, stopping to look at several plant beds. These beds were planted about 5 years ago. They include trees, shrubs, and perennials. Only in recent years has an effort been made to introduce native species. However, most beds contain Common Milkweed (Asclepias syriaca) – possibly by accident, possibly because residents want to help Monarchs. 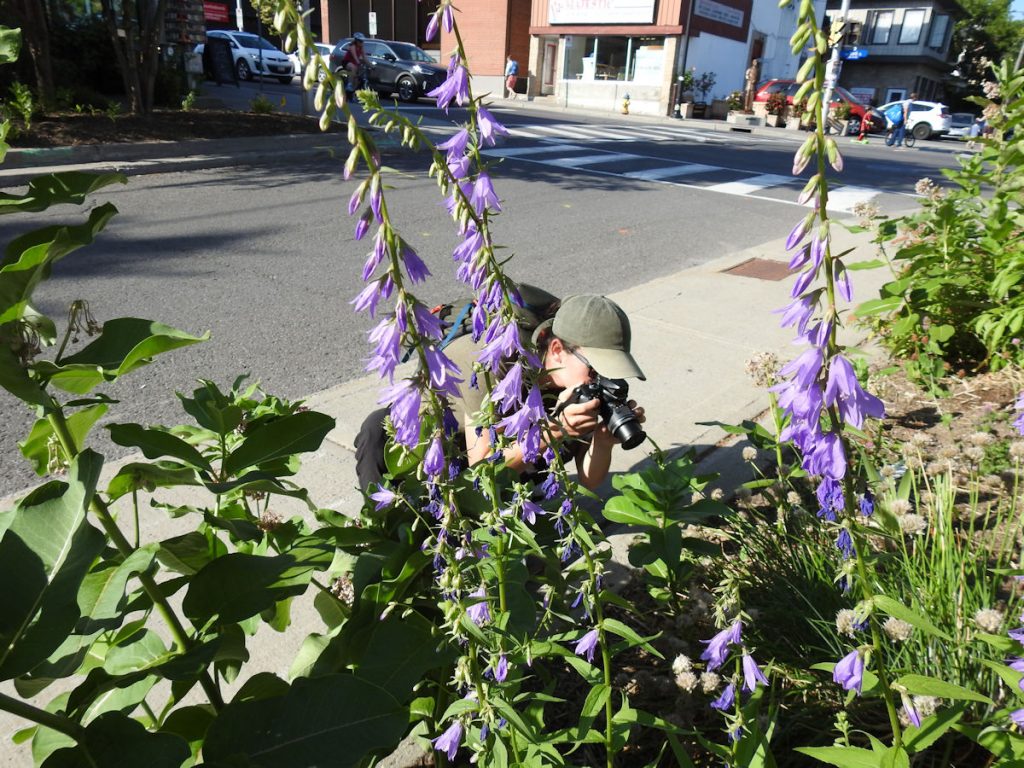 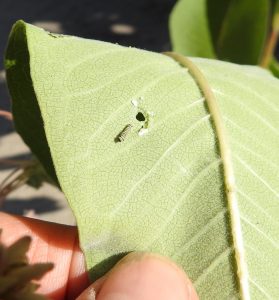 One of the “best” beds is the one at southwest corner of Bank and Glen (photo above). We were delighted to find a tiny Monarch caterpillar on a milkweed leaf there (photo at right), as well as a good amount of pollinator activity.

Some of the “little brown/black jobs” of the pollinator world were buzzing around Creeping Bellflowers (Campanula rapunculoides; a ubiquitous weed). Despite madly shooting dozens of photos, we did not manage to capture any clear images of these tiny pollinators. The best of a poor lot are shown below. Note: sometimes it’s important to just watch. These tiny bees were completely disappearing into the bells of the bellflowers, so impossible to photograph, but we noticed that some were “resting” on the leaves of a nearby shrub; it was easier to focus on these.

In addition to bees, we found Red Milkweed Beetles (Tetraopes tetrophthalmus), which seem to be at their peak at the moment. We also saw a number of invasive Japanese Beetles (Popillia japonica) no longer confined to plants in the rose family, but on just about any vegetation – worrying.

We were happy to find at least one bumble bee still busy collecting pollen and nectar from the milkweed flowers. We DID manage to get photos of this one, which we later learned is a Brown-belted Bumble Bee (Bombus griseocollis).

Alysha also found an interesting-looking fly in the tribe Synanthedonini, a Halictus bee on the sidewalk next to the flower bed, a honey bee, and a bee in the Megachile family, possibly a leafcutter (photos below). 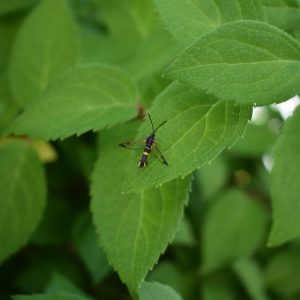 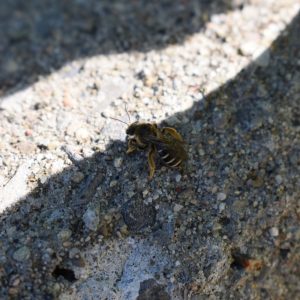 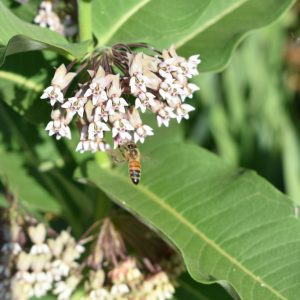 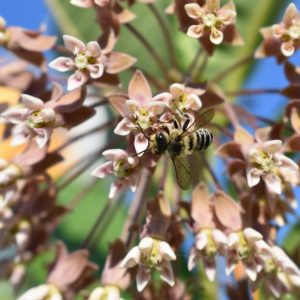 Although it was getting late, we drove over to Lansdowne to look at the flower beds beside the Horticulture Building. They contain a wide variety of flowers, including many native species, so we were curious to see what pollinators might have found these isolated gardens.

Below is a sample of what we found. All photos by Alysha. 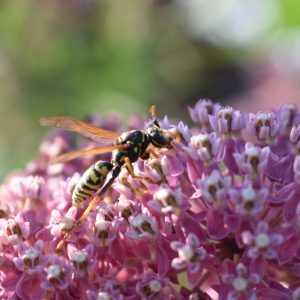 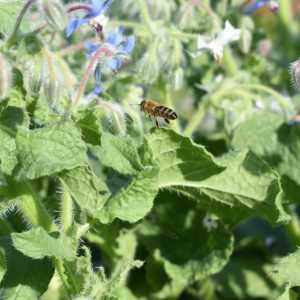 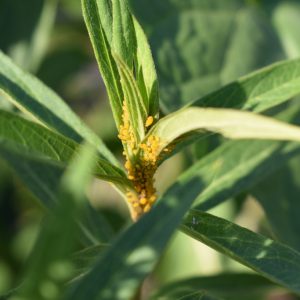 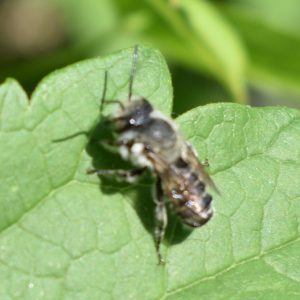 We’re uploading all our best photos to iNaturalist and hope its experts will be able to identify some of these pollinators to species. We’ll update this page if we receive further information.

As mentioned, WPP is trying to get a sense of what is available in our region – native pollinators, native plants, and suitable pollinator habitat. Please feel free to share your photos and observations. A description, a photo, a question: everything is important and we welcome your input. We’re all learning together.