Finding pollinators at the University of Ottawa

For the last 2 years, Ottawa U students and faculty have been carrying out informal weekly pollinator surveys in the many gardens and green spaces on campus. Last Wednesday (31 July) afternoon, I met Renate to participate in one of these surveys.

As usual, we started at the Husky Energy Courtyard. This relatively shady, enclosed area doesn’t attract many pollinators, but today (July 31) we found what we thought was a Nomada, but turned out to be a new-to-me species: Blood Bee.

At the community garden on King Edward Avenue, we found more flowers than vegetables, including a mass of Wild Bergamot plants in one raised bed, a giant thistle of some kind, and Common Burdock in full bloom.

Moving on to the raised pollinator beds behind the Leblanc residence, we found dozens of little black bees on and around the goldenrods. Difficult to photograph because of their size and quick movements, we managed to get enough detail for experts on iNaturalist to recognize masked bees (Hylaeus sp.; photos below). 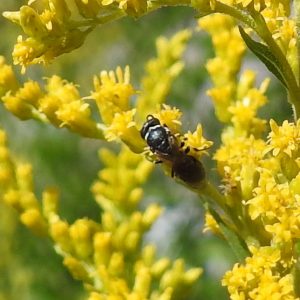 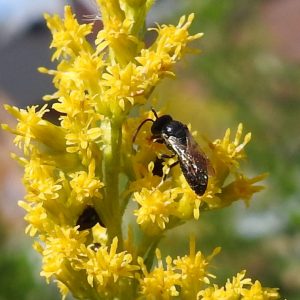 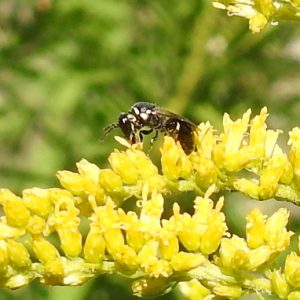 Next stop was the terrace where Blazing Star was blooming along with masses of Purple Coneflowers, a stonecrop, and grasses. 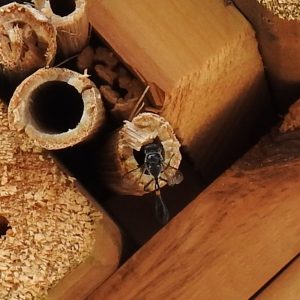 Since mid-June, the Ottawa U group has extended its survey across the canal to Lisgar Street, to see how the new pollinator garden at City Hall is doing.

Amy MacPherson, a natural systems planner, who spearheaded establishment of the garden was eager to show us Monarch eggs on Common Milkweed plants in the garden. Earlier in the day, she had also photographed a bright green sweat bee. Her observation is on iNaturalist.

While we were there, we got to see this little wasp (photo left), which, Amy says, always uses the same “room” in the insect hotel. [UPDATE: In December 2020, this wasp was identified as Trypoxylon collinum ssp. rubrocinctum by insect experts in iNaturalist.] 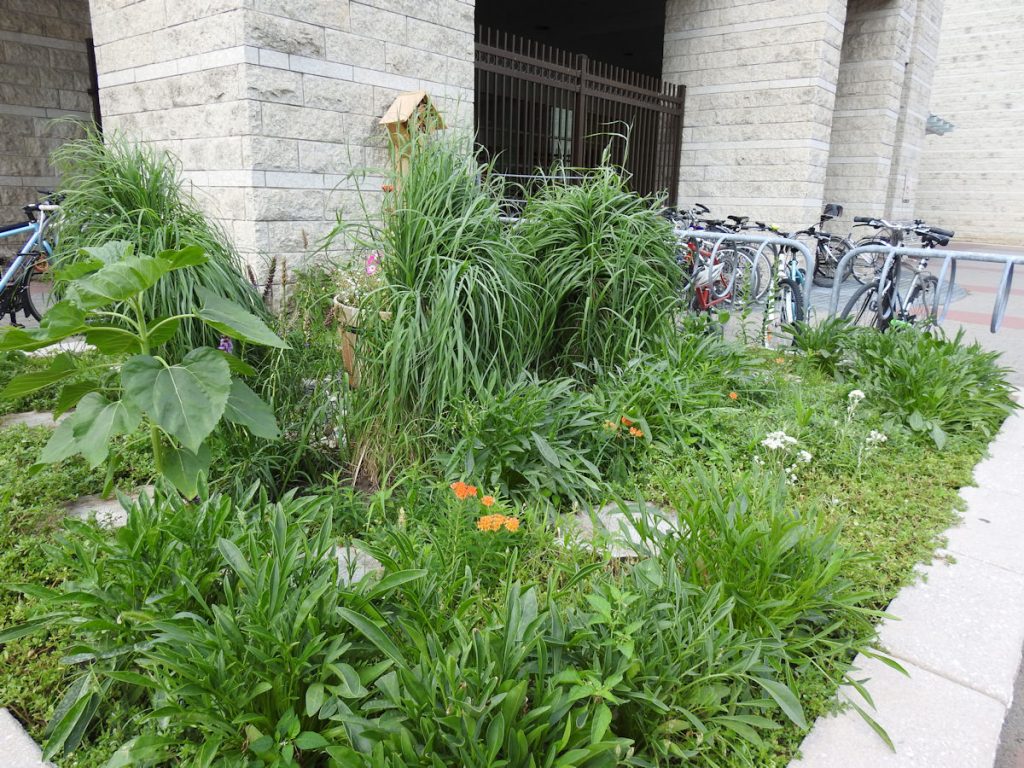 The new pollinator garden at City Hall is flourishing. Butterfly Weed, Pearly Everlasting, and Blazing Star were blooming this day and pollinators were finding them.

Our final stop was the courtyard off Elgin Street at Knox Presbyterian Church. This little green space is a haven for downtowners, including Newton the groundhog who was busy trimming the grass when we arrived. Although this garden includes few native species, many of its flowers are pollinator favourites.

What is the purpose of all this?

Well, I’m learning that not all little black bees are the same. Some “bees” are wasps or flies, and I’m getting better at guessing which is which. I’m also getting better at photographing these fast-moving creatures, which helps iNaturalist experts identify them more accurately.

I’m also learning which flowers attract the most bees and which bees. For example, a mass of St. John’s Wort in bloom last week, was covered with hundreds of bumble bees, at least 3 species. Goldenrods can be relied on to attract a number of pollinators and usually lots of each species. Most flowers in the mint family are great in a pollinator garden, but if you can, choose native species, such as Wild Bergamot, Wild Mint, and Hyssop.

Although we are very aware of “habitat” and have even made a checklist to assess habitat quality, the City Hall garden is a remarkable exception. It’s attracting a number of pollinators and even a Monarch butterfly despite the formidable amount of pavement and stone surrounding it. From that we learned that every bit counts; even a small patch of native wildflowers can help our pollinators.