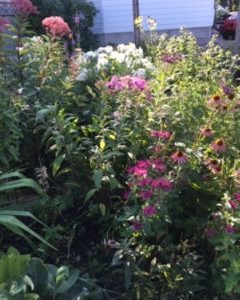 Our colourful but idiosyncratic garden is on an ordinary urban lot at 1826 Scott Street. At the front of the house, frustrated motorists on their morning and evening commutes wait for their light to change. Behind the house, there are native plants and all the small creatures that depend on them.

We have Joe-Pye Weed, three kinds of milkweed, wild irises, native cardinal flower, echinacea, bee balm, black-eyed susans and old-fashioned garden plants like cosmos and tall zinnias, all of which attract bees and butterflies. Our neighbours tell us we have created our own ecosystem on a micro scale.

We started this project when we moved about 30 years ago to this old house with a yard that was a dead urban desert. Years before that, in Saskatchewan, we had learned the art of composting from an elderly neighbour. The results would not be instant, Roy Metcalf told us, but the garden would become vibrant with life. And he was right. To have a successful garden, start with the dirt. Once you have done that, the plants pretty much take care of themselves. Once the soil is nutrient-rich, the problem is not getting plants to grow, we find, but rather, getting them to stop. Once you have the soil and good hardy plants, the bees, butterflies and songbirds will come. They are all around us, waiting to be fed in an increasingly hostile, sterile, concrete-bound urban environment. 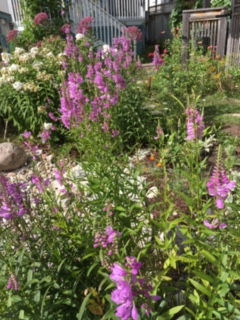 We have quite a variety of bees in the yard. In recent weeks, it was pretty clearly some variety of carpenter bee that had taken precedence. There were hundreds of them, particularly when the aptly-named bee balm was in full bloom. Our neighbour had to cut down a large dying maple tree and had a lot of the wood stacked in his yard. This may have provided the nesting habitat for the wild bees. Now other bees are increasing in numbers, particularly since the Joe-Pye Weed blossoms have matured. They are true bumble bees, including a very large specimen that is black and yellow with orange bands around the tail section, which I believe is called an orange-banded bumble bee.

We have other visitors too that are just as important as the bees — songbirds, dragonflies, and butterflies, including red and white admirals, black swallowtails, painted ladies, Viceroys and Monarchs, depending on the season. All of these come and go depending on what is blooming.

We have had Monarchs (above left), and Viceroys, which mimic a Monarch so closely that they fool the birds, which don’t eat the butterfly, thinking it will taste foul as a Monarch does. Viceroys fool human observers too. We also have a number of Painted Ladies (above right). 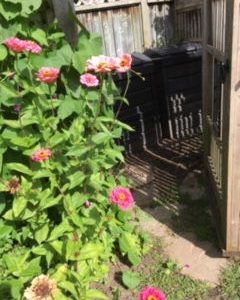 But back to compost – our miracle substance, black gold. We have four composters. We have not used anything else in the garden for the past 30 years, no herbicide, pesticide or fertilizer of any kind (except for the hanging baskets which are in an unnatural environment).  My husband drinks an astonishing amount of coffee. This goes in the compost too, along with yard waste and kitchen fruit and vegetable scraps. We believe all of this provides micro-nutrients which in turn attract our beneficial insects.

Another stratagem is to plant thickly, to reduce water consumption and to create a more natural environment.  And over time we have introduced more and more native plants, which are hardy and generally trouble-free. After all, they belong here, and the native bees look for them as a rich food source. 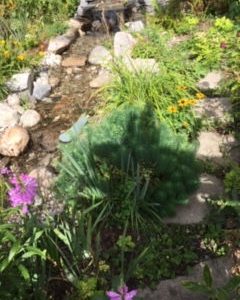 A more recent introduction was our stream, which we added a few years ago (photo at right). We didn’t want a pond because our yard is open to the neighbours. It is unfenced. Our stream disappears into a rock bed, into the reservoir beneath it, and then is pumped to the top again. It is safe for curious children and small animals.

This year we have attracted a number of dragonflies, which do not know that the stream is a fake. They hunt for flies above moving water. The species is called the white-tailed dragonfly. I failed to capture it on my phone. It is a large dragonfly with clear wings with a two brown bands. The male, as the name suggests, has a white tail.

We installed the stream purely for aesthetics, but it turns out to also be an important contributor to the health of the insect life in the yard. Like birds, the dragonflies and other insects appreciate a water source.

Our garden is not tidy, especially as fall approaches and the plants begin to nod and droop, but it is a constant source of wonder to us. Please come to visit us in the heart of urban Ottawa, four kilometres west of Parliament Hill.