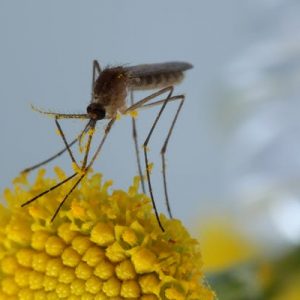 Although it seems that mosquitoes are out to get us, in fact males don’t bite at all and females do so only when they are ready to produce eggs. Their normal food is nectar, which means they visit flowers and, like other accidental pollinators, move pollen from one bloom to another. They are especially important as orchid pollinators. 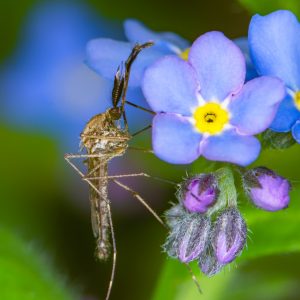 Mosquito in the Culicidae family, photographed on Forget-me-nots by Bob Noble in Brampton, Ontario.

Mosquitoes also pollinate goldenrods (as the sticky pollen of these species adheres to them), as well as grasses and a few other flowering plants.

In the Arctic, for example, where insects are scarce, some plants depend on the hordes of short-lived mosquitoes for pollination (see The bizarre and ecologically important hidden lives of mosquitoes).

Mosquitoes fill another important niche, as they are attracted to CO2. When photosynthesis stops at dusk, plants become net CO2 producers, just when mosquitoes are becoming most active (see Mosquito phytophagy).

So the next time you are tempted to slap that pesky mosquito, take a moment to think about the good they do during the 99% of the time they are not biting you.

One response to “Mosquitoes – important pollinators?”