by Lydia Wong (with expert contributions from Eden Gerner) 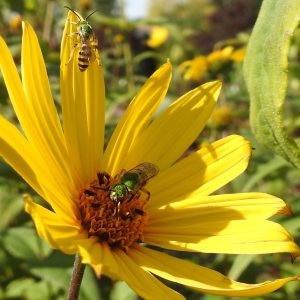 When it comes to identifying bees on the wing, certain species or genera tend to stand out. Take the striking green, yellow, and black of bicoloured sweat bees (Agapostemon virescens), the tremendously fuzzy bodies of bumble bees (Bombus species), and the long antennae of the aptly named long-horned bees (Melissodes species) as examples.

Other bees are less generous with traits that allow for such effortless identification. When I was first learning to identify bees, my notebook was filled with relatively unambiguous counts of Agapostemon, Bombus, and Melissodes, along with a spatter of entries recorded simply as “little black bee.” I eventually learned that those little black bees represent an extraordinarily diverse assemblage, and that my casual label was lumping numerous species across multiple genera together.

Who are those “little black bees”? Identifying bees to species on the fly can be difficult, as the traits that differentiate them are typically indistinguishable unless the bee is euthanized and inspected under a microscope. The size and often superficially wasp-like characteristics of little black bees make them even more difficult to identify. But if one is patient enough to get a good look at one, there are a couple of general characteristics that may be helpful for identifying these bees at least to genus.

Look out for these small, sleek, yellow and black bees. Most species in this genus sport yellow (sometimes white) markings on their face and legs – a characteristic not seen in most other bees encountered in our region (but see “Small carpenter bees” below).

Female bees of other species generally transport pollen by carrying it on the many hairs along their bodies. However, yellow-masked bees are practically hairless. Females of this genus transport pollen by ingesting it directly off the flower and regurgitating it out for the young in their nests.

Named for their habit of nesting in old wood (e.g., stems of dead and broken twigs), small carpenter bees typically look black in the field, but a closer look can reveal their lighter metallic blue colour (sometimes greenish). Female small carpenter bees have a unique abdominal shape, with the sides of the abdomen relatively parallel before coming together in a point.

Individuals of this genus also often have yellow markings on their faces; however, unlike those of yellow-masked bees, they are typically much less conspicuous and show up only as a single small spot in the centre of the bee’s face. Their overall wider and shinier body, as well as the ridges along the body of carpenter bees, also help to set them apart from yellow-masked bees.

Note: The large toonie-sized bees also known as “carpenter bees” (Xylocopa species) are in the same family as small carpenter bees, but are not found as far north as Ottawa. 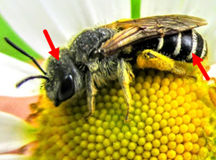 Furrow bee species generally represent the large end of the little black bee size spectrum. All species found in our region sport prominent white stripes along their abdomen. Many species are also characterized by “thick” heads in which there is much space behind the two compound eyes of the bee.

Chelostoma species can be distinguished by their narrow and elongated abdomen and thorax. Most species have a thick layer of pale hairs on the underside of their abdomen (scopa), used for collecting pollen. This is characteristic of many other bees in the Megachilidae family of which Chelostoma species are a part.

This group of little black bees is by far one of the most diverse genera, with species still being discovered. Although Lasioglossum species can differ greatly in appearance, those that are most commonly found in our region tend to sport metallic black bodies and a distinctive head shape in which the wider back of the head narrows toward the mandibles.

Lasioglossum are likely the most frequently encountered small black bees in the city. When I am absolutely stumped by a little black bee that does not exhibit any of the distinguishing traits of other little black bee species (facial markings, elongated abdomen, etc.), my default guess is usually Lasioglossum (although this is definitely not my preferred mode of bee identification!).

Lydia Wong is a graduate student at the University of Ottawa. Her current research focuses on wild bees in the Rocky Mountains of Colorado, but her past projects have included a pollinator study in Toronto.

Eden Gerner is a graduate student at the University of Ottawa. Her current research focuses on the patterns affecting the diversity and distribution of wild bees along an urbanization gradient in the Ottawa area.

One response to “Who’s that “little black bee”?”