We need a source of native wildflower seed for pollinator restoration projects in eastern Ontario.

The benefits of realizing such a dream are far reaching. This transformation would have a huge impact on Monarch Butterfly and other insect pollinator populations. This is important since many of these species have experienced dangerous declines in recent years. Also, ecologically robust wildflower meadows are an important carbon sink for mitigating the effects of climate change. 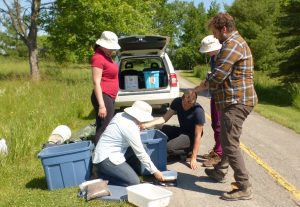 Weighing seeds to get the right proportion of grasses and wildflowers. L to R: Sam, Holly, Paul, Sam, and Alex.

Thus far a source of native seed in eastern Ontario — a source that can meet the demands of large landscape-level projects — has yet to be developed. The native wildflower nursery industry in eastern Ontario is in its early stages, trying to balance supply and demand in the market. Without a ready supply of seeds, operations managers purchase seed from other suppliers further afield.

Because of the lack of local seeds, CWF Monarch Habitat Restoration Ecologist Holly Bickerton used her botanical knowledge of the Ottawa area to locate and collect seeds from 28 native plant species. Most of the seeds collected were used to supplement larger quantities of 22 native seed species purchased from the St. Williams Nursery in southern Ontario. The combined local and southern nursery seed was broadcast over the test plots. Over the next few years, these plots will become fully restored as native meadow habitat.

Seed collecting continued in autumn 2019 and both a training workshop and public seed collecting event were held. Conversations with partners at the Ferguson Forest Tree Nursery and Fletcher Wildlife Garden led Sandy Garland of Wild Pollinator Partners to initiate a regional seed collecting committee to begin the process of building this market in eastern Ontario.