The following is a brief summary of an evaluation report on work along the Sir John A. Macdonald Parkway by residents of Champlain Park. Click here to read the full report. 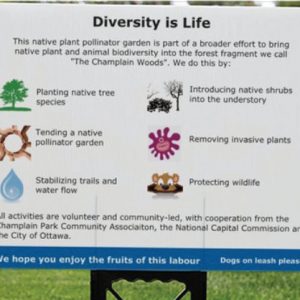 Eighteen volunteers worked on this project and many others helped by contributing leaves and carrying stones. Erecting this informative sign was a way to let other neighbours know about their work.

Over the last decades, the National Capital Commission (NCC) woodlands along the Ottawa River at Champlain Park have suffered from clearing, the ice storm of 1998, and the arrival of invasive species. Since 2011, Champlain Park’s Environment Committee has mobilized volunteers in response to this situation – to increase native plant biodiversity in the public woodlands and residential area. They’ve planted native trees, shrubs, spring ephemerals, and summer flowering plants in small, compact areas cleared of non-native invasive vegetation.

Volunteers focused on three areas. In two, they developed a novel approach to planting to overcome the problem of very thin soil. They built mounds using rotting wood and debris, left after the NCC removed dying ash trees and invasive buckthorn. They added soil and planted a variety of young native trees, such as Paper Birch, White Cedar, Sugar Maple, and Black Cherry. In fall, they added leaves around the trees as mulch and insulation.

In the third area, volunteers also created a pollinator garden, again by building up a layer of soil and debris and protecting the plants with leaf litter. Considerable effort went into preparation, as buckthorn stumps were dug out by hand and all berries were removed from the site. A low stone wall was constructed around the garden, to keep soil in place. Plants and shrubs were carefully watered over the summer and were healthy at the end of the season.

Expected environmental benefits of the project

Funding for this project was provided by local residents and the City of Ottawa Community Environmental Projects Grant Program.

MORE ABOUT THE CPCA ENVIRONMENT COMMITTEE