I hope everyone is doing well and settling nicely into winter. I finished collecting hotels and temperature sensors from all 34 sites back in November, then spent a couple of days in the lab, working through the contenct of the hotels that had hosted bees and wasps this summer.

Most of the nests this year came from leafcutter bees. Grass-carrying wasp nests were the second most numerous, followed by a spatter of other cavity-dwellers. 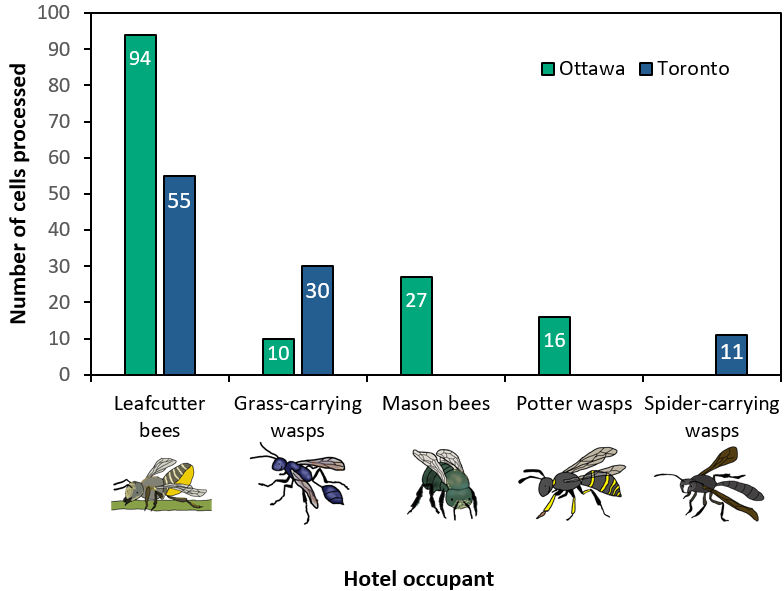 There are so many interesting quirks to all of these occupant types, and I think each deserves a letter of its own… so I’ll start with the leafcutters (Megachile species).

Using a “cocoon-scooper” (nothing fancy… just a plastic knife carved to fit the width of the cavities), I scooped the entire series of cells out of the cavities.

I then carefully separated the cells with my fingers. 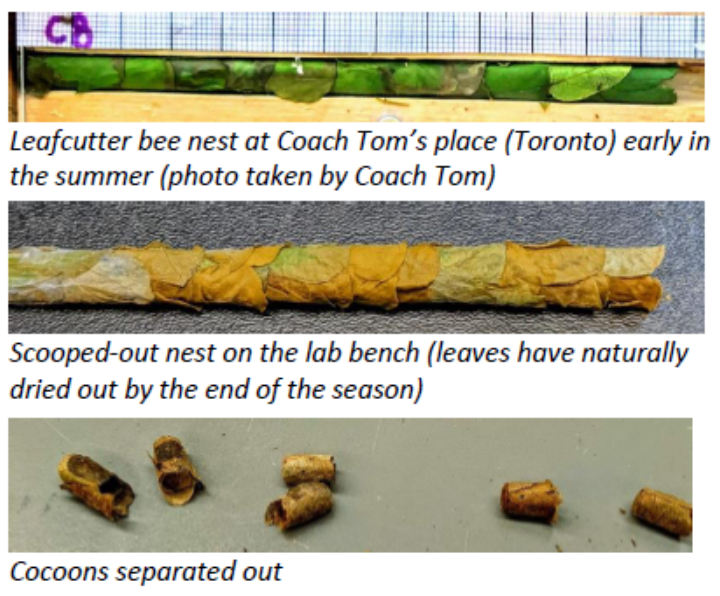 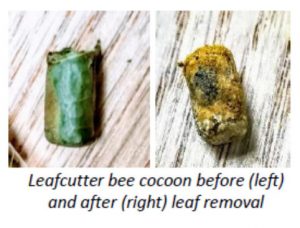 I’d then peel the leaves surrounding the cocoon off with super fine forceps until I got to the cocoon (I needed to weigh the cocoons without all the leaves).

Female leafcutter bees mostly cut two leaf shapes – the more circular ones are for the “head” of the cell while the oval-shaped ones wrap around the developing baby bee. Each cell usually has multiple layers of leaves (multiple circle and multiple oval pieces). 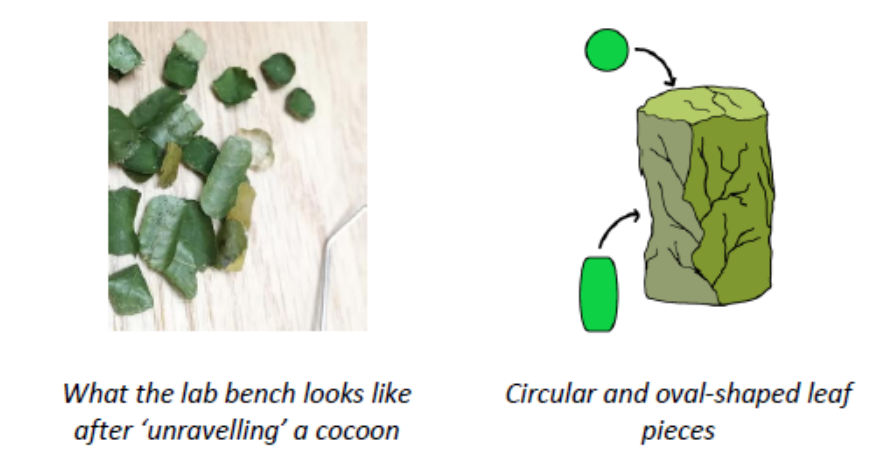 It was neat seeing the little circles of carefully cut leaves all strewn about on the lab bench, although I felt a twinge of guilt for having undone such meticulous work of the mother bee. (Note: all the cocoons are now safely overwintering in small vials outdoors, despite the fact that I removed their leaves.)

Of all the hotel occupants, the leafcutter bee nests seemed to have been the most vulnerable to earwigs and other parasites. In some cases, I could see the damage even before opening the nests. This nest at the Fletcher Wildlife Garden in Ottawa was quite badly “earwigged” (photo below). 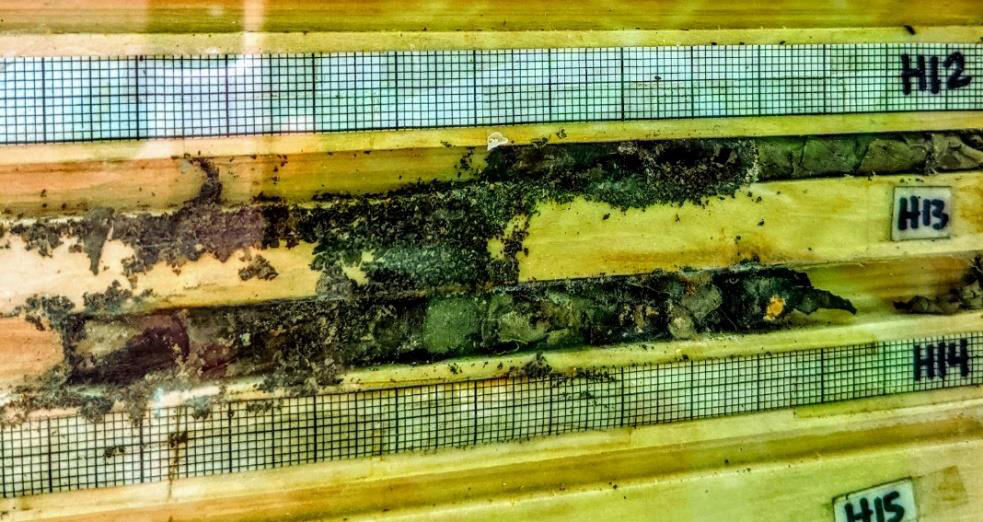 The leaves and nest contents (pollen and developing bees) had been chewed quite thoroughly, and I was left with copious amounts of poop.

In other cases, the nest looked deceptively intact on the outside, only to reveal a row of completely empty cells all the way through.

These nests were likely the victims of chalcid wasps — small parasitic wasps (probably Monodontomerus or Mellitobia species). These wasps are so tiny (often just a few millimetres in length), they were probably able to squeeze into the tiny cracks I left between the plastic pane and wood of the hotels. [Please see addendum below.]

Crack I left between the plastic and wood. 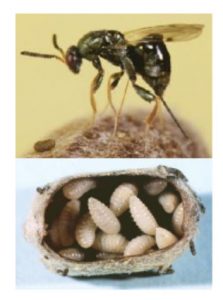 Once in the nest, the female wasps insert their long ovipositors (egg-laying organ) through the leaves of the cell and lay numerous eggs at once. The eggs develop into larvae very rapidly (much faster than the host bee), eating the baby bee in the cell alive as they go… Here are photos (not mine) of a female Monodontomerus ovipositing into a cocoon (top), and a cocoon full of parasite larvae (bottom). Photos by D.F. Veirs.

I found this video taken by George Pilkington of this all happening in real-time. A bit sad – from the bee’s perspective.

Unlike the bees they parasitize, these little wasps can emerge as adults the same year they were born (they don’t need to wait for spring to emerge as adults). To exit from the now bee-baby-less cell, the wasps chew miniscule “exit” holes when they emerge.

I lost close to 80% of the leafcutter bee cocoons to earwig and parasitic wasp damage, which I’ll admit was a little demoralizing. Not to mention, I felt sorry for the poor mother bees who had obviously spent a lot of time provisioning their nests with pollen and nectar and carefully wrapping their children in two sizes of leaves. This is definitely something I’ll have to think about for next summer (minimizing gaps/cracks in the design of the boxes and designing something to reduce earwig occupancy). At the same time, I try to remind myself to see things evenly through the perspectives of all critters – parasitic wasps have their place in this world too. (That said, whether or not 80% loss to earwig and parasitic wasps reflects “natural” conditions is another question – again, very likely a hotel design problem.) I suppose things just get a little hairy from my perspective as a student when they happen to be eating my data! 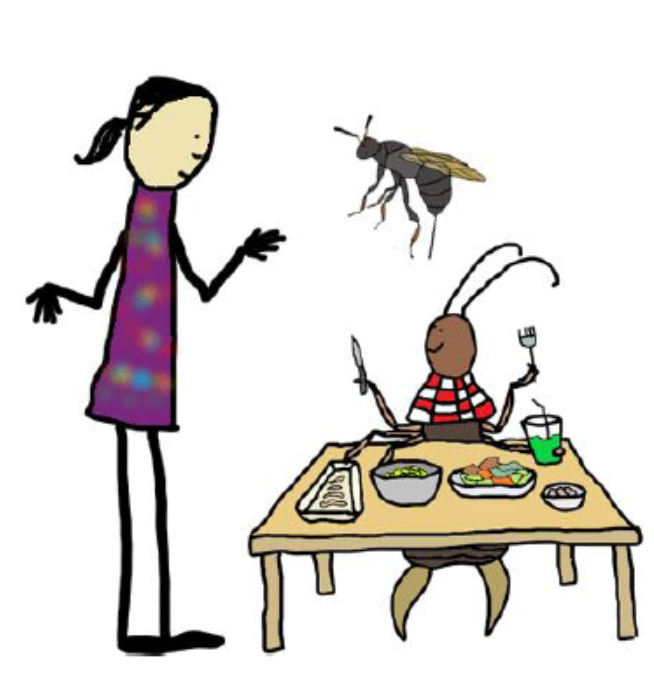 My supervisor, Dr. Jessica Forrest, recently pointed out that some of the ‘chewed through’ and ‘empty’ leafcutter bee cells that I had initially attributed to chalcid wasp attack might have actually been signs of emerged bees! She says the large holes seen in the cells in the video from the last letter looked a little too large to be chalcid wasp holes (although, a number of cells were likely still victims of wasps as evidenced by the minute ‘exit holes’ found in them).

This means that the leafcutter bee babies in those ‘large-hole’ cells could have actually completed development successfully and emerged in the same summer in which they were laid. Having two generations in the same year is known as a ‘bivoltinism’.

Here’s a quick run-down of ‘voltinism’ (fancy word for the number of generations organisms produce in a year).

Most of the cavity-nesting species we get in the hotels in Ottawa and Toronto are ‘univoltine’. This means that mother bees/wasps produce babies in the summer, and the babies don’t emerge as adults until the following summer. Univoltine = 1 new generation of bee/wasp babies per year.

Voltinism can vary depending on the environment and the specific species in question. Some bees/wasps can emerge as adults the same year they were born in and start producing babies of their own within that same year (e.g. the chalcids themselves…). These insects are described as having ‘bivoltine’ lifecycles. Bivoltine = 2 new generations of bee/wasp babies per year. 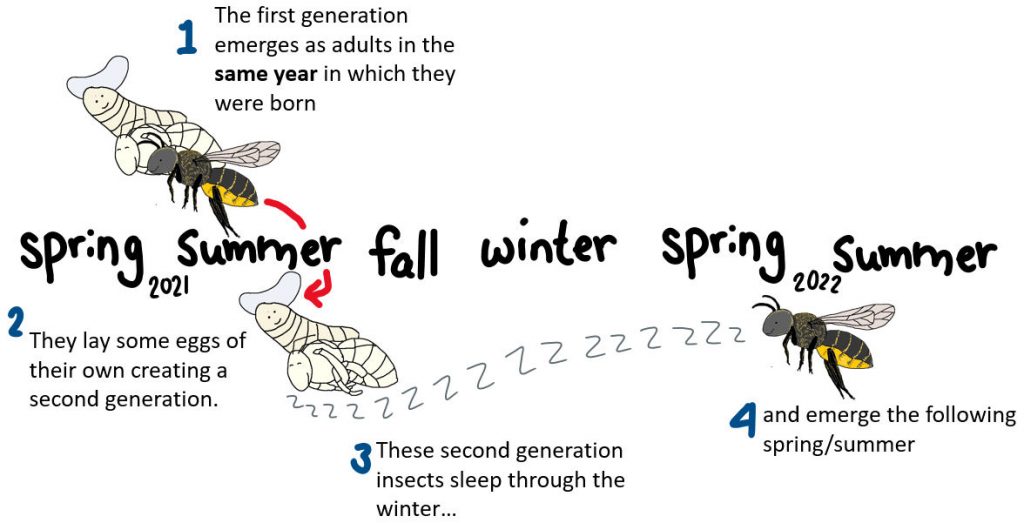 There are other prefixes that can be added on to ‘voltine’ to designate other lifecycles. The bees we work with at Dr. Forrest’s high-elevation sites in Colorado are primarily ‘semivoltine’ as they take two years to finish development; and once insects have more than two generations in a season, they’re often collectively referred to as being ‘multivoltine’ (although I’d imagine this to be quite rare among bees in our region).

Bivoltine lifecycles aren’t super common in leafcutter bees in our area (it tends to be more common among social sweat bees) but can happen once in a while –perhaps more often if temperature conditions are very warm and eggs are laid early in the season. It makes me wonder what this all means as temperatures rise and our summers spill into what is supposed to be fall… Something to muse about as I clean snow off the sidewalk 🙂
For now, I’m happy to know that these hotel occupants might have made it out okay! I apologize to the chalcids for the undue blame. 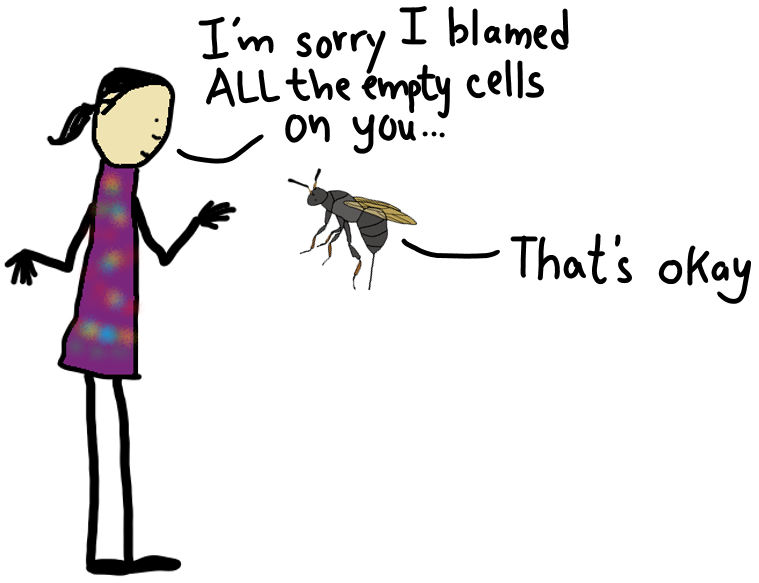