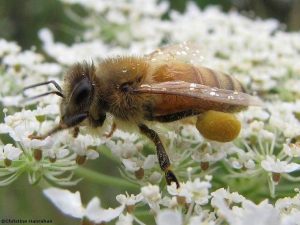 Honey Bee (Apis mellifera) on Queen Anne’s lace, a very popular flower with many insects. Notice the big pollen pack on the leg. There was an equally big one on the other leg too. Photo by Christine Hanrahan

Initiatives seeking to protect wild pollinators face many challenges – as well as many rewards.

One of the most common challenges involves helping people distinguish between non-native, domesticated honeybees (a species commercially managed as part of our agri-food system) and native wild bees (many different species that are integral parts of natural ecosystems). When people begin to understand the wide diversity of wild bees – to appreciate their shapes, colours, behaviours, nesting strategies, life cycles, and more – the rewards can be great.

While the authors do not question the usefulness of managed honeybees as an agricultural aid, they draw attention to numerous serious issues – many based on misinterpretation and lack of awareness – including: 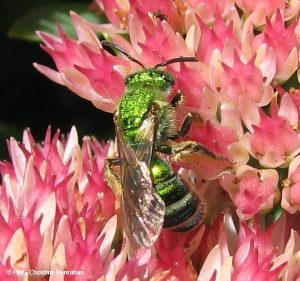 In a research summary, one of the authors, Jonas Geldmann, is quoted as saying, “Saving the honeybee does not help wildlife. Western honeybees are a commercially managed species that can actually have negative effects on their immediate environment through the massive numbers in which they are introduced.”

“Keeping honeybees is an extractive activity,” adds the other author, Juan P. González-Varo. “It removes pollen and nectar from the environment, which are natural resources needed by many wild species of bee and other pollinators.”

Geldmann and González-Varo suggest solutions to some of the problems, specifically changing the way honeybees are managed. They recommend, for example, policies that limit the numbers of honeybees active during specific periods, the sizes of honeybee hives, and the transportation of honeybee hives in response to crop flowering times. They also call for controls on beekeeping in protected areas.