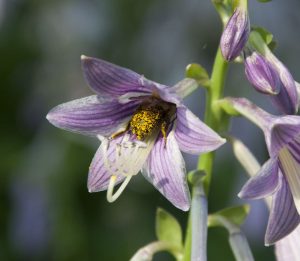 We’ve all heard of this infamous bee species. In fact, if you ask a group of children to draw a picture of a bee, most of them will instinctively produce a plump, fuzzy bumble bee.

Canada is home to about 40 species of bumble bees, and anyone who spends time outdoors, especially around gardens or meadows, is likely to have spotted one. Their long flight season, from late winter to late fall, extensive time spent foraging during the day, and large body size are what make them among the easiest bee species to find.

Beyond being a common garden companion, bumble bees are important, and in some cases essential, pollinators for a wide variety of plants and crops.

The stages of the bumble bee life cycle that occur in early spring and fall are both sensitive and crucial for the success of their colonies.

Newly fertilized queens are the only members of the colony that survive to hibernate through the winter. Therefore, the existence of a colony that will range from tens to hundreds of bees relies entirely on a single emerging queen bee finding the necessary floral resources and a nesting site in early spring. At that time of year, there are few blooming flowers, and changes in climate can shift their blooming time, making the queens especially vulnerable.

Similarly, in fall, males (drones) and new queens are born and mate when they no longer have access to abundant summer-blooming flowers.

Welcoming bumble bees to your garden 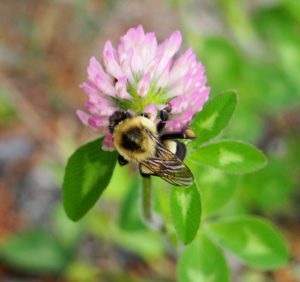 Bumble bees are generalists in that they can feed on a variety of different flowers. By planting many species of bee-friendly flowers – making sure to include some that bloom in the spring, summer, and fall – you can provide food for them throughout their life cycle. While selecting plants, consider those that don’t contain pesticides, select a variety of shapes, sizes, colours, and show preference for native species. Click here for a list of bee-friendly flowers native to Canada, provided by Friends of the Earth Canada.

Bumble bees often establish nests underground, such as in abandoned rodent tunnels, but they may also nest above ground in areas with the right cover. You can provide nesting habitat by not excessively tidying up around your garden area and inserting features, such as rock piles, logs, bunch grasses, or do-it-yourself underground nest boxes.

New queens don’t stay in their native nest over winter, but rather hibernate in small cavities just below the ground surface, or above ground in safe areas. Areas of well-drained bare soil and above ground features with gaps and crevices make suitable overwintering sites.

There are several other bee-friendly garden practices that you can adopt. These include

Ghost in the making – a video that Dave showed us when he conducted a workshop on bumble bees at the Fletcher Wildlife Garden in 2016.

The plight of the bumble bee – video filmed by John Davidson at the Fletcher Wildlife Garden in summer 2016.

Dave Van Olst is currently pursuing graduate studies in environmental sustainability at the University of Ottawa. He became interested in bumble bees when he worked as an intern with Friends of the Earth in Ottawa.