by Sandy Garland, with much help from Declan Hill, chair of the project 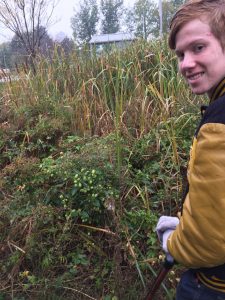 From mowed grass to thriving meadow and wetland

According to Declan, this project started because the community was “tired of cars invading our neighbourhood” – a problem when an 8-lane “highway” (Bronson Avenue) borders a quiet residential neighbourhood.

Rather than complain, Declan says, “We wanted to make a beautiful, living, breathing wall of trees that would both help our community and give beauty to our city. We would also like to create a landmark for everyone who enters Ottawa from the airport.”

This started a long-term drive to beautify the strip of grass that runs from the Dunbar Bridge over the Rideau River to the Bronson Bridge over the canal, a distance of about 1200 m. Only a year later, the neighbourhood newspaper reported:

“Our goal is to breathe new life into the strip of green land that runs along Bronson Avenue. We do this project to protect our community from the sound, sight and fumes of the traffic and also to make sure our neighbourhood becomes ever more beautiful, the birds and animals are protected and the history of our area is not paved over. We are group of over 70 Old Ottawa South residents, to date we have planted over 100 trees in the area with kind support from Tundra DVD store, Old Ottawa South Grocery Store and the Ottawa South Community Association.” [Declan Hill, OSCAR, July 2011] 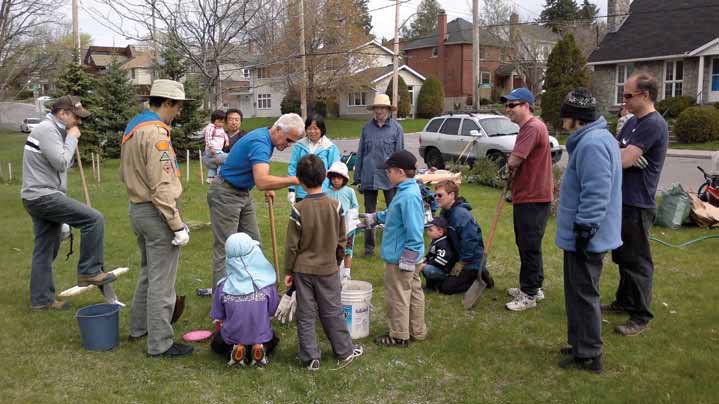 In 2011, scouts and residents gathered to plant trees under the guidance of Noel Lomer

Almost every year since, residents have rallied to fill the area with trees of all kinds, from crabapples to spruces, from locusts to the progeny of a 140-year-old historically significant silver maple (see The Tree That Made Canada Is Coming To Old Ottawa South).

The project has hit some barriers. In March 2013, the city held up a grant to pay for that year’s trees (see City stalls tree-planting project). And plans for “reconstruction of Bronson Avenue threatened the whole project (Update on Bronson tree planting). On the ground, several unwanted plants – notably Dog-strangling Vine and Buckthorn – have invaded the area to some extent. 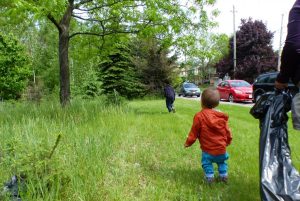 Mowing has been an issue, with the city accidentally cutting down new saplings. Compromise: the city mows a strip of grass along the road; the residents carefully stake new plantings to make sure they are clearly visible. Photo by Sandy Garland.

On one occasion, the city mowed down 40 newly planted trees and has refused to install garbage bins in the area. But residents persisted and have now turned what used to be a “monoculture” of mowed grass between Bronson Place and Bronson Avenue into an oasis of trees and flowers, even including a small wetland.

In 2014, the residents held a very moving ceremony, complete with bagpipers, where they planted two of the original maple trees that inspired Canada’s flag and national symbol.

Two volunteers drove to Toronto, at their own expense, to pick up the trees. As Declan describes, “We then planted the trees with the help of Afghan veterans, children, and federal politicians: Senator Vern White, Paul Dewar, and Catherine McKenna. There were also speeches by veterans Lewis McKenzie, Michel Drapeau, and Markus Besemann.

In 2017, the Bridge-to-Bridge project connected with the Fletcher Wildlife Garden and Wild Pollinator Partners, with both latter groups contributing native wildflowers and flowering shrubs that were planted by OOS residents in October. Noel Lomer, a long-time supporter of the project, summed up the rather wet morning in an email message to all volunteers: 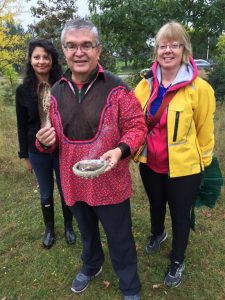 We had a very good turnout today, in the warm, wet early Fall. Here [photo above] is young Tom, a neighbour showing the natural Hops growing in the wetland near Sunnyside. Here too is Simon, our Elder from the Aboriginal community, who blessed the site and our work with a “smudging” [photo right].

We had a clean out of Dog-strangling Vine, and Sandy brought a lot of plants and shrubs to bring new growth, especially to the east side of the site, along Bronson Place.

I was pleased that the Dog Strangling Vine was not too evident in the bulrushes of the wetlands. We cut down a number of Manitoba Maple invasive trees, to enable the growth of the Walnut trees which have been seeded naturally, probably by squirrels.

Our site is flourishing. We can look forward to this work continuing with the willing and able team of volunteers who continue to diligently look after the site.

As evident from Declan’s descriptions and stories in the local newspaper, many people are involved in this project. Residents are highly committed, returning every year to plant, water, or pick up garbage as needed. Organized events bring out business people, scouts, school groups, and dignitaries – and the site is blessed by elder, Simon Brascoupe.